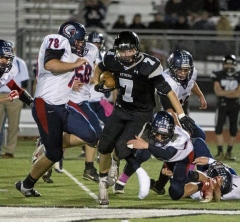 ATHENS - The Wildcats closed out their season on a high note Friday night, defeating Sayre 49-0 in the Rusty Rail game.

The win caps a strong final month of the season in which Athens went 3-1.

Athens quarterback Tyler Forbes had a big day, running 14 times for 164 yards and four scores and completing 3-of-5 passes for 73 yards.

Forbes started the scoring at 9:13 of the first quarter on a three-yard run and at 3:57 Peyton Lewis scored for Athens on a two-yard run.

Forbes struck again at 9:30 of the second quarter on an eight-yard run and he capped the half with a 67-yard scoring run.

In the third quarter it was Forbes again on an 18-yard run at 9:30 and then Brandon Sturzenegger got into the act at 3:40 with a five-yard run.

Kalen Keathley capped the scoring with 3:32 left on a one-yard run.

"I knew if we came out and controlled the line of scrimmage, good things would happen on both sides of the ball and that's exactly what happened," Athens coach Jack Young said.

Keathley gained 46 yards on eight carries and Lewis had 32 yards on a carry as Athens ran 45 times for 353 yards.

Lewis had one catch for 37 yards and Keathley had a 34-yard catch, while Cody Cain caught one ball for two yards.

Gavin McCutcheon was 2-for-7 passing for 34 yards for Sayre and Marshall Felt had a catch for 36 yards, while James Harbst had one catch.

Young credits his seniors with the win in their last home game.

"If I was going to single out any group, I would have to say credit for this win goes to our 10 seniors," he said.