Athens pulls out win over Wyalusing. 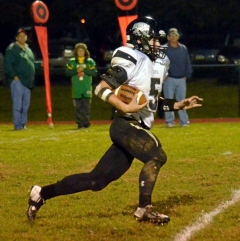 WYALUSING - Coming from a five game losing streak, the Athens Wildcats were not expected to pull away with a win while on the road versus the Wyalusing Rams.

But nevertheless, the visiting team came out on top with a well-earned and hard-fought 34-28 victory over the Rams last night at Peterson Stadium.

"If you look at Wyalusing's opening drive - they shoved that ball right down out throats," commented Athens head coach Jack Young. "And we talked about that; there's time where we can't stop that. Especially when you're outsized and those guys are as strong as they are at the line of scrimmage. With the way our season's going, those kids could have folded their tent real easy. But all we've been preaching these last couple weeks is just about taking pride in everything that we're doing. We had trouble finding confidence tonight, but halftime was a different locker room than normal and we came out and played with confidence. When they scored it was like alright, now we have to score again. I'm just super proud of them. These kids just kept fighting. This was all about pride tonight."

The second half was when the visiting team shined the brightest, because the events of the first didn't look promising. Wyalusing would choose to receive and gain the first possession on the night. Carries all the way down the field from Luke Jennings and Dylan Otis would set up the Rams at the Athens 1. Here the Athens defensive line would let up and allow Otis to cross into the end zone for the easy one-yard score, putting up the first points on the scoreboard. Warner Mendoza's ensuing PAT was good, and with 5:21 left in the first quarter, the Rams took the lead, 7-0.

A short kick return would put Athens at their own 34, and a run from Tyler Forbes along with a few incomplete passes would result in a punt, giving the ball back to Wyalusing, who would waste little time when it came to tacking on more points to their lead. This time it was Jennings' turn to make things happen, and on second and nine on the Athens ten, he easily ran in for the score up the left sideline with 11:16 left in the half. Mendoza's PAT was again true, and Wyalusing extended their lead, 14-0.

Athens would punt again on their next drive, and Wyalusing would regain possession of the football effortlessly. Although this drive didn't result in a score, on first and ten on the Athens 48 yard line, junior Luke Jennings set a record. In all of Wyalusing history, the highest number of rushing yards in a high school career was held by David McCarty with 3,200 yard. With his short one yard gain on first and ten, Jennings broke this record. Total yardage on the night for Jennings added up to be a whopping 233, along with 3 touchdowns, adding to this new record.

After the news of the record setting junior was announced over the loudspeakers, the Wildcats took the initiative and decided it was time to put some points on the board. As if scoring wasn't enough, Athens did so with a 66-yard Tyler Forbes pass to Kalen Kealthley with 3:38 remaining in the first half. Unfortunately, Austin Lister's PAT was no good (hitting the right side of the goalpost) and the Wildcats trailed, 14-6.

The climax of the first half occurred right before the buzzer, with an impressive tackle from defensive player Zane Vargason after a completed pass from Wyalusing QB Justin Haley to Collin Edsell that resulted in an 8-yard loss for Wyalusing. This play must have sparked a fire, because the Wildcats came out of the locker room ready to take anything.

At first, everything was all too familiar. After one 22-yard completion and a couple of lost yards, the visiting team handed the ball to the Rams by way of a punt, and the home team reciprocated. Only then did the Wildcats step up their game. A three play drive was all it took: on second and five on the Wyalusing 6, Brandon Sturzenegger would glide into the end zone for the score. Instead of the extra point, the Wildcats would try for the 2-point conversion - and succeed - with a pass to Bill Bennett to tie up the game, 14-14.

From here on out, the game was back and forth. Wyalusing answered right back on their next drive, scoring with only 2:27 left in the third quarter on an easy 11-yard run from Jennings. This time, though, Mendoza's PAT was no good, and the Rams now lead 20-14.

There was no need for any sort of drive, because when Kalen Keathley caught Mendoza's kick, he returned it 75 yards down the middle of the field for the touchdown. The Wildcats looked to pull ahead by a point, but Lister's PAT was short, tying the game once again at 20-20.

Wyalusing's next punt was short, giving Athens the ball at the Wyalusing 45. From here, Tyler Forbes completed a 45-yard touchdown pass to Keathley with 11:42 left to play. Another 2-point conversion attempt succeed for the Wildcats, putting them ahead for the first time all game, 28-20.

Being a game of taking turns, the Rams would score again on their next drive. Justin Haley would complete the 53-yard touchdown pass to Luke Jennings with the clock reading 9:32. The Rams also went for the 2-point conversion, tying up the game again at 28-28 after Jennings ran the three yards into the end zone.

Precious time wasting away, the Wildcats knew it was their turn to do something. A key pass from Forbes to Lister set Athens up at the Wyalusing 27, which would soon prove to be good scoring position. A few plays later, and on third and fifteen, Forbes would complete another pass, this time to Bill Bennett, for the score with 5:59 remaining in the fourth quarter. Austin Lister's PAT was good, and the final score of the night would be set, 34-28.

To finish off the game, the Wildcats continued to play their relentless defense of the second half, causing Wyalusing to fumble on their next possession, taking the ball back and running out the clock.

Last night's game handed Wyalusing their third loss of the season and it gave Athens their second win. Next week, the Wildcats travel to Cowanesque and the Rams play Wellsboro at home.