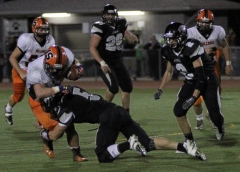 The Bulldogs limited Athens to 79 total yards in the game.

Lorson started the scoring with 3:18 left in the opening quarter on a four-yard run. Colby Koch hit the extra point to make it 7-0.

Lorson capped the scoring with 1:11 left in the game on a 19-yard run and the kick failed.

Kalen Keathley led Athens with two carries for 30 yards and Brandon Sturzenegger had 13 carries for 12 yards. Luke Newman had a carry for seven yards and Zane Vargason and Tyler Forbes each gained four yards on the ground.

Logan English was 6-for-17 passing for 93 yards for Jersey Shore.

Forbes had an interception defensively for the Wildcats.