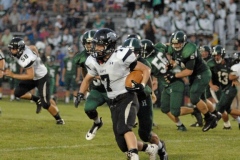 HUGHESVILLE - The Athens Wildcats took to the road on Friday night and came home with a 42-7 loss.

Hughesville got off to a fast start as Hughesville took a 27-0 lead at the half.

The Spartans built the lead to 42-0 after three quarters.

Logan Henry threw a 10-yard touchdown pass to Trey Smith with 6:44 left in the opening quarter and the extra point missed to make it 6-0.

Clint Snyder scored on a one-yard run with 26 seconds left in the quarter and the Trent Woolcock kick was good to make it 13-0.

In the second Henry hit Sean Poust on a 32-yard touchdown pass and Woolcock's kick made it 20-0 with 10:25 left in the half.

With 8:51 left in the half Clint Snyder scored on a 33-yard run and Woolcock made the extra point.

In the third Henry threw an 82-yard touchdown to Poust and he hit Smith with the two-point pass to make it 35-0 and with 3:38 left in the third Smith scored on a 35-yard fumble return and Woolcock made the extra point.

Athens got on the board in the fourth as Justin Reagan connected with Austin Lister on an 18-yard touchdown pass.

Lister made the extra point.

Lister had the one catch and a touchdown and Cody Cain had a catch for 17 yards.

Zack Jayne had 32 yards on four carries and Luke Newman had three carries for 28 yards. Kalen Keathley had 26 yards on 10 carries and Brandon Sturzenegger had 18 yards on eight carries.

Payton Lewis had 10 yards on three carries and Matt Collins had one carry for seven yards.

Zane Vargason had an interception for Athens and Smith and Zach Fry intercepted passes for Hughesville.