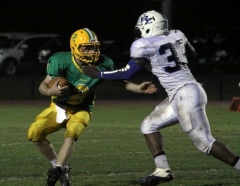 WYALUSING - The Pius X Royals played the role of spoiler for the Wyalusing Rams' homecoming football game, using a balanced offensive attack to rout the Rams 42-21.

The Royals got the scoring started early when T.J. Belle found room on the right side of the field to score on a 40 yard run. Dalton Tucker's extra-point attempt was good to put Pius X up 7-0 with 9:23 to play in the first quarter.

Wyalusing looked to have the tools to keep up on offense, as they retaliated to the early Royals' touchdown with a thirteen play 37 yard drive before turning the ball over on downs. Pius X took over and wasted little time extending their lead, with quarterback Tre Jordan finding receiver Nate Stewart for a 69 yard touchdown pass on the third play from scrimmage. Tucker's extra-point was good to put the Royals up 14-0 with 2:30 to play in the first. Jordan finished the game going 12-13 through the air for 191 yards and two touchdowns.

After Luke Jennings fumbled the ball on the ensuing Wyalusing drive, Pius X found themselves in a second-and-31 situation after successive penalties. Running back Dashon Russell found room on the right sideline to score their third touchdown of the game. Tucker's extra point made the score 21-0 with 7:58 to play in the first half.

Wyalusing wasn't ready to roll over yet though, as they gave the ball to running back Dylan Otis six times, including a three yard up-the-gut run to give the Rams their first score of the night. Warner Mendoza put the extra-point through to make the score 21-7 with 3:35 to play in the first half. Otis finished the game with 121 yards and a touchdown on 27 carries.

After Wyalusing went three-and-out to start the second half, Pius X again extended their lead, this time with Jordan finding Eric Provosty for a 45 yard touchdown strike. Tucker's extra-point made the score 28-7 with 8:28 to play in the third quarter.

Justin Haley threw an interception of the Rams' subsequent drive, giving the Royals the opportunity to put the game out of reach. After the turnover, Russell scored again, this time from three yards out. Tucker's extra-point made it 35-14 with 3:56 to play in the third quarter. "They were more physical in the third quarter than us," Wyalusing head coach James Buchman said. "They just wanted it more in the third quarter."

After trading punts, Wyalusing got their second score of the night when Jennings broke a 53 yard touchdown run. Mendoza's extra-point made it 35-14 with 4:07 to play in the game. Jennings finished the night with 184 yard and two touchdowns on sixteen carries.

Pius X responded again, with reserve quarterback Nick Brotzman found Provosty for a 40 yard touchdown. Tucker's extra-point gave the Royals their final points with 1:55 to play in the game.

Jennings' night wouldn't end yet, as he broke off another big touchdown run, this time on a 45 yard scamper. Mendoza's extra-point made the final score 42-21.

"We see a different type of football (when we play N.T.L. schools)," Pius X head coach Phillip Stambaugh said. "They use more of a two tight end, two back set. We hope it helps us if we see something similar down the road."

Wyalusing will travel to play North Penn next week.