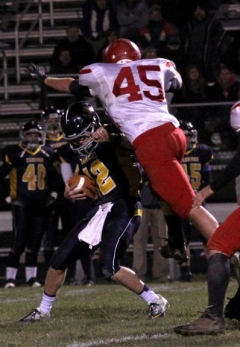 MONTOURSVILLE - All season the Troy coaches had been trying to implore their players with the importance of starting fast.

On Friday, the Trojans couldn't have started any faster as on their first play from scrimmage Jed Wright ran 94 yards for a touchdown.

That set the tone for Troy, who raced out in front and kept Montoursville at bay in their 34-14 District IV, Class AA semi-football win.

"It feels awesome," Kyle Schucker added. "Montoursville is a great team and I just felt that we give it everything we got."

"It's something we talk about all the time," he said about starting fast.

The Trojans ran for 293 yards as a team, 193 of them by Wright on 14 carries. He also had two touchdowns in the game while Ross Sherman (four carries, 52 yards, a touchdown) and Diante Jones (seven carries, 35 yards) also shouldered some of the load with Brandon Mattocks leaving the game due to an injury.

However, 217 of those yards came in the first half as the Warrior defense stiffened up in the second half.

"I think as you saw here tonight it was important that we started fast," Smith explained. "This was a team once they settled down and got used to seeing what we did the ball got a little bit tougher to move down the field. It was important we came out and got a lead early."

Wright's only completion was a 16 yard touchdown pass to Ryan Reeves late in the first half. He finished 1-for-2 on the day.

The Warriors were able to move the ball most of the game as they had 293 yards of total offense, including 189 on the ground. Keith Batkowski led the way with 18 carries for 173 yards but the Trojan defense came up big when they needed to, especially in the first half. Twice they forced Montoursville to turn it over on downs and didn't allow them to score until late in the first half.

"It was key," Schucker said about the first half stops. "We just got the stops and got the offense back on the field and kept rolling."

The Troy defense seven sacks on the day, too.

"Obviously it's vitally important," Smith said about his defense's play in the first half. "Football is a game of momentum and all it takes is one play and you go from in it to out of it that fast. For the guys to come up and make big plays is huge."

The Warriors rotated starter Griffin Dunne and freshman Bryce Mussina in and out at quarterback to try and get a spark. While Dunne was 6-for-9 for 40 yards Mussina went 0-for-6.

Late in the fourth quarter, Taylor Strein came in and was 3-for-7 for 60 yards.

Curtis Miller was their top target with four catches for 34 yards.

Montoursville took the opening kick-off and on their third play from scrimmage Batkowski ran for a 54 yard gain to the Troy 15 yard line.

But that's where the Trojans made their first big stop, holding Montoursville on a 4th-and-1 to turn it over on downs.

Then on the next play Wright found a seam on the right side of his offense and went 94 yards untouched.

"I definitely didn't expect that to happen," Wright remarked. "I'm glad it happened."

Josh MacClaren added the point after to make it 7-0 with 9:40 left in the first quarter.

The Warriors went 4-and-out their next drive with Wright taking their punt down to the Montoursville 16 yard line.

Ben Sherman then ran 13 yards to the Montoursville three yard line but that's as close as they got. The Montoursville defense had a goal-line stand but Troy got points out of the drive anyway as MacClaren hit a 19-yard field goal to make it 10-0 Troy with 4:19 to go in the opening quarter.

On the Warrior's next drive they were able to pick up two first downs but once again found themselves on fourth and short. Dunne dropped back to pass but was sacked for a 12-yard loss and Troy took over at their own 46 yard line.

Three plays later, and on the first play in the second quarter Ross Sherman out ran the Montoursville defense 50 yards for paydirt. MacClaren added the point after and Troy had a 17-0 lead with 11:49 left in the first half.

On Montoursville's next drive they began to look more like the Warriors that their fans were used to. Mixing a couple passes they were able to pick up big chunks of yards and even converted on 4th-and-6 to get to the Troy 13 yard line.

That's when it broke down as Dunne was sacked three straight times and they went all the way back to the 32 yard line.

However, their punt was stopped at the Troy 1-yard line by Batkowski focing the Trojans to start their next drive in the shadow of their own goal posts.

They would be forced to punt giving Montoursville good field position at Troy's 34 yard line.

Three plays later Dunne was able to scramble for yards on a busted play to his right, picked up some down field blocks and scampered in for the 24 yard touchdown run.

James McMahon added the point after and with 52.6 seconds left in the half the Warriors got on the scoreboard but still trailed 17-7.

With not much time it looked like Troy would have to be content to go into the break up two scores.

But on their second play from scrimmage Wright ripped off a 39 yard run, getting all the way down to the Montoursville 16 yard line.

They spiked the ball and it looked like MacClaren would be called out for another field goal try. But the Trojans took to the air for the only time during the contest as with 15.3 seconds left Wright hit Ryan Reeves behind the Montoursville defense in the back of the endzone for a 16 yard scoring strike.

MacClaren added the extra point and the Trojans took a 24-7 lead into the half.

"It definitely helps," Wright said about taking the early lead. "It calms you down a little bit to start the game off."

Troy got the ball to start the second half and drove to the Warrior 45 yard line before it fizzled out and they were forced to punt.

Despite being down the top seed Warriors were no stranger to deficits. They had to come back for wins against Mifflinburg and Lewisburg during the regular season.

Montoursville got the ball on their 17 yard line and went to work as on the second play from scrimmage Batkowski ripped off a 56 yard run, caught from behind by Jones.

From there they nickeled and dimed their way towards the Troy endzone, including converting on a 4th-and-1. On the 12th play of their drive Matt Shea punched it in from a yard out. McMahon added the point after and Montoursville cut the deficit to 24-14 but the long drive had worked in Troy's favor as only 2:17 was left in the third quarter.

"It was a little sketchy," Schucker said about their play to start the second half. "But we knew we could pull it off."

However, Troy's offense continued to sputter and they were forced to a 3-and-out on their next drive.

The Trojan defense came up big again, forcing the Warriors to a 3-and-out of their own.

Needing a game deciding drive to end it Troy would go nine plays on their next drive, highlighted by a Jones 19 yard run. MacClaren would hit a 22 yard field goal to make it 27-14. Even better for Troy, the drive took a big chunk out of the clock and only 5:34 remained in the game.

Montoursville came out with Mussina on their next drive and a spread offense but the Troy secondary forced four straight incomplete passes to force their third turnover on downs.

Taking over at the Warrior 27 yard line Troy would only need three plays to shut the door completely. On first down Wright went 16 yards around his left side and dove for the pylon to get the touchdown. MacClaren added the point after and Troy would go up 34-14 with just four minutes to go.

"We still had to get a couple stops but it's great to end the game that way," Wright remarked. "We just wanted to hold on and keep getting stops on defense."

Their defense did the rest, forcing Montoursville's fourth turnover on downs in the game deep in Troy territory to secure the win.

Coming into the season Troy knew they could have something special so this doesn't come as a surprise to them.

"We expected to be here," Wright said. "We just want to keep going."

Troy will now take on Danville, 28-21 winners over Loyalsock, for the district title next Friday.

This is a dream come true for the Troy coaches, players and fans.

"Words can't describe what I feel right now," Smith said. "I knew coming into the season we had the team capable of competing at this level but you have to have a little bit of luck along the way. We've had that at times and the kids have continued to work hard all season long, I'm awful proud of the kids."

As they get ready for the Ironmen Troy is going to work on keeping their kids mentally sharp.

"99 percent of this game is mental," explained Smith. "These kids have been trained physically all year and their bodies will respond accordingly, mentally and emotionally is the one thing that can either make or destroy you. We can't read into it we just have to come out and play football."