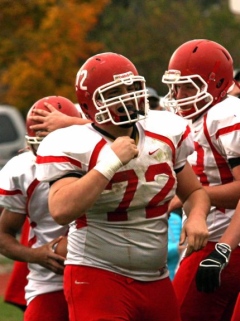 Troy's Dylan Brennan has earned several accolades for his blocking on the football field this season.

And now the NTL Co-Lineman of the Year can add one more: All-State.

The Junior was named to the AP Pennsylvania Football Class AA All-State team as an offensive lineman.

"Awesome," Brennan said about being named to the All-State team. "This is the greatest accomplishment of my life besides winning a district title. I love it."

He didn't think he would ever achieve such an honor.

"We didn't make it far in the state playoffs and there's a lot of other good players," Brennan said. "But I'm very thankful."

This only motivates him to work harder for next year.

"I will work to get faster, get stronger, get better," he said. "We want to do it all again next year and go further."

"I think it's a great thing for Dylan," Smith remarked. "He's one of the kids the last couple of years that has really worked hard in the weight room, striving to get better every day. He's a very coachable kid. I feel that he's very deserving of that status based on his performance this year."

Smith believes Brennan was the centerpiece of a dominant Troy offensive line this season.

"I felt like as a whole our line was a good group," he said. "I think Dylan was probably our best lineman, most dominant lineman. He anchored us down right in the middle."

And it wasn't just his physical ability that impressed his coaches.

"He's very, very intelligent," remarked Smith. "He comes off the field and we get good information from him. It's like having a coach on the field as well."

As for Brennan's future, Smith believes this will help get him attention from college coaches.

"He wants to play football in college and I think this sort of rewards him a little bit," he said. "At the same time, he knows he's got to get better and keep working hard if he wants to do that."

This is also a big reward for the program Smith and his coaching staff are trying to build at Troy.

"I am very proud of our team and proud that Dylan made this team," Smith said. "I'm not sure if we've had a kid make All-State in the recent past but this is definitely a mark we can talk about. It's something that other kids know they can do in the future, that it's possible to be recognized on such an elite squad."