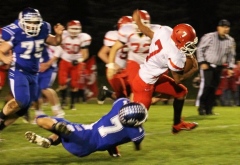 Jed Wright led the Trojans with 86 yards and a score on eight carries while seven other Troy ball carriers had 20 yards or more in the win.

Wright led off the scoring with 3:40 left in the opening quarter as he ran for 56 yards to paydirt. Josh MacClaren added the point after to make it 7-0.

Then with 1:59 left in the quarter MacClaren punched one in from four yards out. He added the extra point to put Troy up 14-0.

Then in the second quarter Ross Sherman scored on an eight yard run. MacClaren added the point after to put the Trojans up 21-0 with 8:55 left in the half.

That's when North Penn answered back as Bo Burleigh hit Devin Remley with a 54 yard touchdown strike less than a minute later. Bryce Zaparzynski ran in the two point conversion to cut the deficit to 21-8.

The Trojan's came back with another scoring drive as Sherman scored again, this time from 10 yards out. MacClaren hit the extra point and Troy led 28-8 with 5:17 left.

Troy would score late in the half as Brandon Mattocks punched one in from 8-yards out with 1:18 left in the second. MacClaren added the point after to make it 35-8 at the break.

In the third quarter Troy took to the air as Wright hit Gage Burns for a 42 yard touchdown strike. The two-point run was good as Troy took a 43-8 lead with 10:29 left in the third.

The final score came with 9:26 left in the third as Dayton Wood returned a fumble 32 yards to paydirt. Zaparzynski ran in the 2-point conversion to make it a 43-16 final.

Diante Jones had eight carries for 50 yards for Troy while MacClaren and Ross Sherman had 50 yards each on the ground. Chance Lantz added 34 yards, Nick Stephani and Ben Ross had 32 each, Mattocks added 28 and Isaac Havens had 23.

Through the air Wright was 2-for-3 for 38 yards with a touchdown.

Burleigh was solid in the loss, going 10-for-16 for 209 yards, hitting six different receivers.

Luke Kelly led the Panthers with three catches for 80 while Remley had the one touchdown catch for 54. Brady Andrews made three grabs for 30 while Zaparzynski had a catch for 23.

On the ground Nick Mahonski led the way with 47 yards on four carries while Zaparzynski had 40 yards on 11 carries. Levi Christman added 27 yards on three touches.