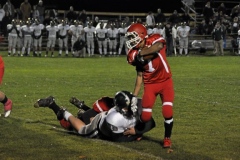 TROY - The Trojans celebrated Senior night with a 59-10 shellacking of the visiting Hughesville Spartans at Alparon Park last night. It was a total team effort, as 15 different players carried the ball for a combined 49 rushes for 540 yards and eight rushing touchdowns on the night.

The Spartans came in with only one win over the last two seasons, and may have caught the Trojans taking them too lightly, as they scored the first 10 points of the ball game. Their opening drive took only seven plays and covered 53 yards as Junior running back Clint Snyder ran in from 5-yards out to give them the early lead, 7-0.

Troy would fumble the ensuing kickoff, and Hughesville recovered in great field position on the 40 yard line. A 34 yard completion brought them to the Troy six yard line, where the defense stiffened and forced a 22 yard field goal by Melvin Derhammer and a Spartan 10-0 lead with 7:03 left in the first. This was enough to awaken the sleeping giant, as Troy would dominate from here on out, outscoring Hughesville 59-0 the rest of the way.

Jed Wright would spark the offense ripping off runs of 19, nine, and five yards on his first three carries. Ross Sherman finished off the drive, scoring from three yards out, with Josh MacClaren hitting his first of 8 PAT's on the night to make it 10-7. Troy's second drive covered 64 yards on seven plays, with Wright scoring from four yards out to go up 14-10 with :33 left in the first. By halftime Troy would lead 38-10, on scoring runs of six yards by Diante Jones, 22 yards by Brandon Mattocks, and five yards again by Jones. MacClaren added a 24 yard field goal just before the half expired to round out the scoring.

Troy would receive the second half kick and pick up right where they left off, traveling 63 yard in seven plays with Mattocks scoring his 2nd touchdown on the night, this time from six yards out to put the Trojans up 45-10. Following a Nathan Swain interception, they moved the ball from their own five yard line to the Hughesville 26 where MacClaren had a rare miss on a 44 yard field goal attempt.

On their next drive, Chance Lantz ran in from 29 yards out, making the score 52-10. With the mercy rule clock running, the Trojans substituted freely, and several younger players got significant carries to finish out the 4th quarter. The final score of the night came on a 26 yard jaunt by Cody Ercolino, with MacClaren's final extra point making it 59-10.

Jed Wright led all rushers with 155 yards and one score, while Diante Jones added 25 yards and two scores, as Chance Lantz had 66 yards on four carries and a touchdown.

Troy finishes their regular season at Canton next Saturday afternoon as they look to maintain possession of the "Old Shoe."