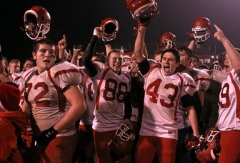 DANVILLE - It was a moment Troy football fans have been waiting for since 1988.

The solid red stands shouted T-H-S late in the fourth quarter through to the end as the Trojan football team celebrated their first District IV, Class AA title in 25 years down on the field Friday night.

Emotions went the gambit for Troy.

"It's just awesome for everybody," Quarterback Jed Wright remarked.

"It's the best feeling in the world," running back Diante Jones elated.

"I am proud of our kids," Smith said. "I'm personally ecstatic and I'm so happy that we could represent our town of Troy and I'm, if not more happy, we could represent the NTL. I think has really shown that it is a pretty tough league."

Troy's offense continued to hum and there was nothing Danville could do to slow it down, with the Trojans rushing for 376 yards as a team in their 35-14 win over the defending district champions.

"It good that we didn't have any low points in the game," Wright said "We were just nice and steady."

"It was amazing," added Troy center Dylan Brennan. "We knew what we had to do and came in and got it done. We were firing on all cylinders, we played our game and we played hard. It was great."

As the game went on Smith could see his line's work in front of him from the press box.

"We got big kids and their physical kids and they move well," he said. "Early on I think it's harder going and as the game proceeds on and kids start to wear out, from that booth, you can really see a surge. In a sense it makes play calling easy."

As most nights it was a group effort for Troy in the backfield.

Wright ran for 114 yards on 26 carries with four touchdowns, three in the second half, while Diante Jones had 100 yards on 16 carries.

"It was great," Jones said about running the ball. "The line just got a huge push and there was just open holes everywhere."

Jones also had 18 yards on a critical screen reception.

Chance Lantz pounded out 62 yards on five carries, all to kill time in the second half, while Ross Sherman had 10 carries for 43 yards, Nick Stephani had four carries for 41 yards and Ben Sherman added had 16 yards on six touches.

Sherman caught the other Wright pass, a left handed lob one yard with no time left for a touchdown.

Wright finished the day 2-for-5 for 19 yards with the touchdown and one pick.

Danville found some traction in the second half with their pass but never truly threatened the Trojans as they couldn't stop Troy's running game.

"It gets closer but you can't lose your cool," explained Wright. "You have to stay composed."

The Ironmen got the ball first but the Troy defense forced them to punt after a 3-and-out.

Troy's first possession had a foreboding look as they were pinned down at their own nine yard line.

But they went to work quickly as on their second play from scrimmage a Wright pitch to Jones went 18 yards for a first down. Three plays later another pitch play between the two netted nine yards and a new set of downs.

Jones then ran it up the gut for 14 yards and into Danville territory. A Stephani run for 14 yards got inside the Ironmen 30 yard line and from their the Trojans chipped away On the 15th play of the drive Wright punched it in from a yard out to put Troy on top first.

Josh MacClaren added the point after and Troy led 7-0 with 3:20 left in the first quarter.

On Danville's ensuing drive Isaiah Croll gave them a 13 yard gain on their third play from scrimmage but the Ironmen were forced to turn it over on downs as quarterback Zack Kozick was sacked for a 10 yard loss on fourth down.

Troy's next drive wasn't as fruitful as a holding penalty kept them getting a first down and they were forced to punt.

Wright's punt back Danville up to their own six yard line where Troy's defense forced them to another 3-and-out.

Troy got good field position as Danville's 44 yard line and thanks to a nine yard Ross Sherman run they got down to the 30. However, Danville's defense stood tall, forcing Troy to turn it over on downs.

But it was no use as the Ironmen offense once again couldn't find any traction, being forced into another 3-and-out. Then things went from bad to worse for Danville when on the punt attempt their punter slipped and the ball bounced forward along the ground. Troy's Brandon Mattocks scooped it up and brought it back to the Ironmen 38 yard line.

With short time Troy's offense went to work, nickel and diming their way to the Danville 13.

But the same slippery field struck Troy as on a roll out Wright fell six yards back, down at the 19 yard line.

With less than a minute to go Wright would hook up with Jones on a screen pass, with Jones carrying the pile down to the one yard line.

"Just go out there and do what I've been doing," was what Jones was thinking as he knew the play was coming to him. "Just rely on people to block for me and just run the ball."

Troy spiked the ball with less than 20 seconds left. However, on their next play Wright was stopped on the QB sneak and Troy scrambled to get back to the line. With just a few ticks away from the half Wright tried the sneak again and again looked stopped in the backfield as he tried to get to the left edge.

However, with a defender holding on to his jersey Wright was able to lob a pass with his left hand to Ben Sherman in the end zone with no time remaining.

"It was supposed to be a quarterback sneak but they snuffed it out," explained Ben Sherman. "Jed gave me a little nod when I was blocking, I released off and he just flicked it up with his left hand and I came down with it."

Sherman wasn't sure if Wright would be able to get it off with the Danville defense barreling down on him.

"I was a little nervous about that," he said. "He was almost down."

It was a play, though, that his coach is accustomed to seeing Wright make.

"We're blessed the last couple weeks to have one of the best athletes in District IV," Smith said.

The point after was no good but Troy had a commanding 13-0 lead going into the break and all the momentum on their side.

"It was huge just to be able to be up by two touchdowns," Ben Sherman said about the extra cushion at the break.

While their offense was doing whatever they wanted, accruing 195 total yards and 176 on the ground, their defense had held Danville to 28 first half rushing and 32 yards total.

"It was awesome," Schucker said about stuffing Danville's run. "That's what they were trying to do. Once they brought the pass we knew it was almost over."

But the Ironmen had been here before. The week prior they were down 21-7 in the first half to Loyalsock but came back to win 28-21.

And last week Troy was up 24-7 over Montoursville in the first half only to have a third quarter let down.

But there was no let down this time.

The Trojans got the ball to start the half and started where they left off.

Beginning at their own 40 yard line they chipped away, going 40 yards on nine plays down to the Danville 20. Then on second down Wright ran right on the option as the Ironmen defense was sucked up into the middle. The senior quarterback trotted into the endzone, giving Troy a 19-0 lead after the failed two point conversion with 7:15 to go in the third quarter.

But Danville showed their resourcefulness. They couldn't get anywhere on the ground so they took to the air.

Starting at their own 20 yard line the Ironmen would go all the way on 16 plays, nine of them passing plays.

The key was a 38 yard strike from Kozick to Croll down to the Troy 15 yard line. Then on fourth and go the two hooked up again for an 8-yard scoring strike. Danville's Shayne Riley added the point after to make it 19-7 Troy with 1:19 left in the third.

The Trojans answered back.

Starting on their own 44 yard line Jones ran 19 yards on the first play from scrimmage to the Danville 35 yard line.

Six plays later Wright ran it in from 15 yards out on an option up the middle to score with 10:14 remaining in the game.

Lantz pounded in the 2-point conversion and Troy pushed the lead back to 27-7.

Danville went back to their passing attack on their next possession, getting to the Troy 48 on completions of five and eight yards. But the Trojan defense stiffened, forcing the Ironmen to turn it over on downs from there as Kozick only went 1-for-4 on the set of downs.

It looked like Troy was going to seal the win on the next drive as they pounded the ball behind Lantz down to the Ironmen 31 yard line.

However, a Wright pass was picked off in the endzone by Caleb Klein, giving the Ironmen a glimmer of hope.

Riley added the point after and Danville cut the lead to 27-14 with just 4:44 left in the game.

Then on Troy's next possession the Ironmen had their chance. They had forced Troy into a 4th-and-1.

Wright ran behind his big center Brennan for the first down. Lantz followed that up with a 45 yard run to the Danville six yard line where Wright ran it in from there for his third touchdown of the second half

Lantz shut the door with the two point conversion and Troy went up 35-14.

Danville put in their second unit on their ensuing possession and the Trojan celebration began.

Troy did a good job keeping their offense on the field in the second half to secure the win, something they didn't do as well against Mt. Carmel and Montoursville.

"We melted a lot of time off the clock," Wright said. "That was huge."

The Trojans know that next week they will have to do better against the pass.

"We'll just not give the wide receivers so much cushion," remarked Schucker. "Just go from there."

Their big back Sam Dressler was muted, though, rushing for just 23 yards on nine carries. In fact, Danville only mustered 78 yards on the ground on 26 touches.

Through the air Evan Tanner had the most catches, five for 25 yards, while Klein had the most yards, 59 on three receptions.

The Trojans did this by going through some tough Heartland Conference opponents in Mt. Carmel, Montoursville and Danville. But they seemed to get better each week, evidence by their increased margin of victory.

"We had the mindset where we have to come out and play," Brennan explained. "We know that the first half had to be our game, control the tempo on offense and control the scoring on offense."

Troy will face either Littlestown or Burks Catholic in the first round of states next weekend but right now they are enjoying the first district title in Troy since the late 80's.

"It's huge to the players, the fans, the town, everybody," remarked Wright.

They had an omen coming into this season that this might be their year.

"The old banner in Troy is actually falling down," explained Brennan. "Put that new number up, it's the greatest feeling in my life."

At the beginning of the season Troy knew they had something special. They were gearing up for the NTL Large School title but came up short to Wellsboro.

However, the district title was a nice consolation prize.

"I wouldn't trade this for the NTL any day of the week," added Smith.