Troy rolls to win over Towanda. 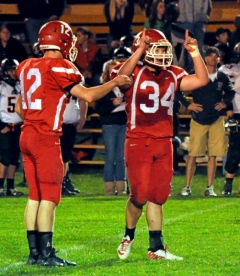 TROY - A victory, a king and queen, and a hope that maybe there could end up being a three way tie for the NTL Title all were on the Troy Trojans mind in their 37-7 win over the Towanda Black Knights on Friday.

As a result, Troy experienced what one might call the quintessential homecoming football game under those always faithful and ever true Friday night lights.

To start off the game, the Trojans pounded out a sixteen play drive for 78 yards. On first and goal, senior Ross Sherman put the first points on the board with an easy three yard run. Josh MacClaren's kick was true, and with 4:38 on the clock, Troy led, 7-0.

Towanda struggled on their first possession, which ended in a three-and-out. The Trojans continued their run when in the second quarter, Brandon Mattocks ran the two yards needed for another score. MacClaren's kick was good and Troy extended their lead to 14-0 with 9:02 left in the half.

Mattocks popped up again on first and ten of the Knights' successive drive and intercepted a Noah Huff pass and then in turn set up his teammates at Towanda's 24 yard line. On fourth and four, MacClaren kicked a 35-yard field goal and the Black Knights still trailed, 17-0 with 6:19 to go.

Another turn over hurt the Black Knights on their next drive. On second and three, Dayton Wickwire fumbled around the 39 yard line and Jed Wright scooped up the ball and raced tight along the right sideline for the touchdown. MacClaren's kick was through the middle and 2:31 remained in the second quarter with the scoreboard reading 24-0.

Another fumble before the end of the first half on part of the Knights and Troy got the ball back on the opposing team's 44 yard line. MacClaren got another chance to show off his skills when he attempted a career-long 50-yard field goal and succeeded. With only seconds remaining, Towanda was yet to score and Troy led, 27-0.

The Black Knights came out of the locker room looking to get some digits on their half of the scoreboard, and that is exactly what they did. After 17 plays (and on third and three), junior quarterback Noah Huff ran 12 yards into the end zone for his team's first touchdown of the night. Kicker Tyler Basse's extra point was good, and the Knights cut the lead to 27-7 with 5:34 left to play in the third quarter.

MacClaren's third field goal came to be on fourth and nine with 1:06 left in the third. The field goal extended the Troy lead to 30-7.

Two completed passes from Huff on Towanda's ensuing drive looked promising at first, but on second and fourteen, he threw his second interception into the familiar arms of Mattocks.

Troy did not take advantage of this change and turned the ball over 7 plays after receiving it.

Both teams traded punts in the minutes to follow soon after, and as if the night couldn't get any better for the Trojans, they quickly jumped on a fumble and turned it into another touchdown. Sherman scored for the second time in his varsity career and said, "I would just like to thank my entire team for actually making this possible as a homecoming." The final score was set with Sherman's touchdown and MacClaren's kick at 37-7.

"I was really proud of the kids, they played hard against a good Towanda football team," Trojan head coach Jim Smith said of their homecoming victory.

"The big thing is that we didn't put the ball on the ground; we didn't turn the ball over. I don't think we had too many penalties, and that's really the key to winning. We were fortunate early in the first half to pick up a couple turnovers. Things went our way, and I'm proud of the kids; this was a good football team that they beat."

Next week, Towanda plays Loyalsock at home and Troy travels to North Penn.