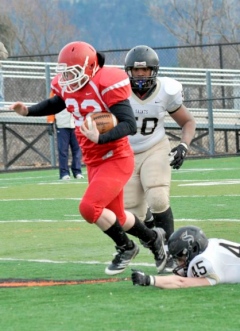 TOWANDA - Troy got a rude welcome to the state level of Class AA football as Berks Catholic's Chris Warren took the opening hand off 70 yards around the right side for the game's first touchdown.

And while the Trojan defense found some traction from the second quarter on Troy's offense wasn't able to get going until the second half, too little time as they lost 33-6 to the Saints in the PIAA Class AA quarterfinals Saturday.

"They're a pretty good football team," Troy coach Jim Smith said about Berks. "They've got good athletes out there and they're deep."

The Saints used that athleticism to bust out scoring runs of 70, 41 and 31 yards as they road their big play offense and fast, gang tackling defense to the win.

While Berks totaled 308 yards of rushing offense Troy was held to just 161 yards, most of which came up the middle.

The Trojans struggled to get to the outside as the Saints defense held Troy's speed backs to just 10 yards on nine carries. They did find success up the middle as power backs Chance Lantz had 59 yards on 11 carries while teammate Ben Sherman added 22 yards on four touches but it wasn't enough.

Quarterback Jed Wright had 59 yards on 20 carries with the team's only touchdown.

Warren led Berks with 109 yards and two touchdowns on seven carries, including scoring runs of 70 and 31. Pop Lacey added 78 yards on nine carries with a touchdown while Cooper Kutz had 40 yards on three carries and Todd Reedy had 40 yards on five carries.

Berks got most of their offense on sweeps and inside counters, needing just a crack to break open a big run.

Through the air the normally pass reluctant Trojans out threw the Saints. Wright was 3-for-6 for 44 yards while Isaac Havens was 1-for-2 for 24 yards and an interception.

Berks' two quarterbacks were a combined 1-for-5 for four yards.

The Saints scored three times in the first quarter, beginning with their opening play 70 yard touchdown run. They would miss the extra point.

Troy's opening possession had a similar first play as Wright kept the ball on an option and looked to have open field in front of him but stumbled coming off the line for a seven yard gain. The Trojans would be forced to punt three plays later.

Troy's defense held strong on Berks' next drive and forced them to punt. However, their own offense was once again stymied into a 3-and-out.

The Saints' big play ability came alive in their third drive as Reedy busted out a 25 yard rush on the second play from scrimmage followed by Warren running for a 31 yard touchdown run with 3:53 left in the opening quarter.

Drew Stanko added the point after and Berks' led 13-0.

Troy was forced to punt in their ensuing drive where Lacey returned it 41 yards to the Trojan nine. Two plays later Patrick Causa punched in the 1-yard score to make it 20-0 after the point after with 47 seconds left to play in the first quarter.

On the ensuing Trojan possession a big third play looked to give Troy new momentum but a block in the back call ended that drive.

On Berks' drive after the punt a 25 yard run by Kutz got them down to the Troy 22 but the Trojan defense held strong from there, forcing the Saints to turn it over on downs after two big pass deflections at the good line.

On Troy's ensuing drive they got out to mid-field but the Berks defense forced a bad pitch. The Saints would recover the fumble then go two plays in 25 yards for the touchdown. The point after was no good but as Berks led 26-0 with 5:08 left in the half.

Troy would get some momentum on their next drive thanks to a little bit of trickery.

On fourth down and four the punt snap went to upman Havens, who hit an open Walker West for a 24 yard gain. A 9-yard Sherman run would get Troy inside the Saints' 25 yard line but the drive stalled there. On third down Havens would once again get the call on the half back pass but he was intercepted by Warren to take the game to the half.

In the second half the teams traded punts followed by another strong Trojan drive.

Sherman started things off with a seven yard carry. Then on second-and-11 Wright hit Havens for a 30 yard gain to the Berks' 35 yard line.

Another Wright pass, this time to West, got Troy to the Saints' 20 and a new set of downs. However, that's where Troy stalled again as the Berks defense stiffened up and forced the Trojans to turn it over on downs.

Troy's offense looked once again to find a groove as on their third play from scrimmage Wright found a seam up the middle but the Saint's defense forced a fumble and earned their third takeaway of the game.

The Trojans would force Berks to punt and have one last chance to get some points on the board.

Keyed by Lantz's power running Troy went 64 yards on 11 pays to hit pay dirt on a 1-yard Wright plunge. Lantz had 45 yards on six carries during the drive.

Troy faked the field goal to Dylan Brennan for the 2-point conversion was the offensive line-man was gang tackled at the five yard line.

"The kids never gave up," an emotional Smith remarked.

He pointed out how they hung with one of the top ranked teams in the state from the second quarter on, where Berks out scored them 13-6 after the opening quarter.

But three drive killing turnovers and the Saints' big play offense was too much to overcome for the Trojans.

Looking ahead to next year the future still looks bright. While they lose Wright among other key seniors they also get a lot back.

As for the out going class that got Troy back on top of the district for the first time in 25 years and broke new ground in Trojan history books, Smith couldn't say more.

"They are a smart group of kids," he remarked. "These kids made sacrifice after sacrifice, time away from their families and off season stuff."