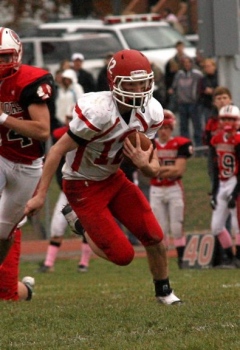 CANTON - In the 59th edition of the "Old Shoe Classic," it was the visiting Troy Trojans who came away with a 45-9 victory.

Canton entered the game on a five game winning streak and a chance to make district playoffs with a win, but the Trojans were able to capitalize on two key special teams turnovers and 100 yards in Warrior penalties.

The Canton miscues started with the opening kick, as they fumbled an attempted reverse that Nick Stephani recovered on the Warrior 3 yard line. Three plays later QB Jed Wright would sneak in from a yard out, and Josh MacClaren's extra point made it 7-0 with only 1:23 gone in the first.

Troy's defense, which was strong all day, would force it's first three-and-out, followed by a Jed Wright 22 yard punt return, setting up Troy on the 43. From there it would take only two Diante Jones runs, the second covering 37 yards, for the Trojans to go up by two scores. MacClaren's second PAT made it 14-0 with 8:07 left in the first.

Following another Canton punt the Trojan offense marched 84 yards aided by a 35 yard Wright run down the sidelines which had an additional 15 yards tacked on for a late hit out of bounds. The drive would stall at the Warrior six, and MacClaren added three more points on a 24 yard field goal.

A big kickoff return set Canton up with their best field position of the day at the 20 yard line. But three plays would net them only 2-yards, and Brian Jannone made a 35 yard field goal to cut he lead to 17-3 with 2:14 left in the first. He would follow that with the mistake of kicking deep to Jed Wright, who promptly returned it 83 yards for the score, putting his team up 24-3 with 1:59 left.

Canton's special teams woes continued as their next punt was returned 60 yards by Brandon Mattocks to the Warrior 31. From there Wright would score his third touchdown of the half covering all 31 yards on a second down carry. MacClaren was again true and the lead was now 31-3.

The Warrior offense finally got untracked in the form of a 32 yard halfback pass from Garrett Wesneski to Chase Pepper. Tyler Cole finished the drive, rushing in from 14 yards out. Jannone's extra point was blocked and with 8:45 left till half the scoreboard read 31-9.

Both teams traded punts before the Trojans put another drive together. Aided by a 45 yard screen pass and another Warrior personal foul, they had first and ten at the 11 yard line. But the Canton defense stiffened and forced a 27 yard field goal attempt which they blocked. This momentum shift would propel them on a 15 play 52 yard drive. But with only :06 left till halftime, a 4th and 15 pass attempt from the 18 yard line fell incomplete, sending both teams to the locker room with the score 31-9.

The Canton miscues continued in the second half as Tyler Cole fumbled a punt return into the waiting arms of Troy's Ross Sherman. Tacking on a late hit penalty, Troy had first and goal on the 1-yard line, which Jed Wright quickly converted on a QB sneak for his 4th and final score on the afternoon. MacClaren added the point after and the rout was on 38-9.

The remainder of the third quarter saw listless and sloppy play by both teams, punctuated by 5 punts and several penalties. During that span the Canton sideline received two unsportsmanlike penalties followed by the ejection of a member of the coaching staff.

Troy's final score came on the legs of Chance Lantz, who carried nine times on a 10 play drive punctuated by a 35 yard jaunt. MacClaren's final kick made it 45-9.

Despite the lopsided score Canton had 256 yards in total offense to Troy's 326 and led in first downs 12 to 11.

Jed Wright led all rushers with 88 yards on 15 carries followed by Chance Lantz with 78 yards on 9 carries. Tyler Cole paced Canton with 55 yards on 10 rushes while QB John Bowman had 11 completions for 153 yards. Canton finishes the season 5-5 while Troy will host a first round playoff game as the number three seed in district 4 AA with an 8-2 record.