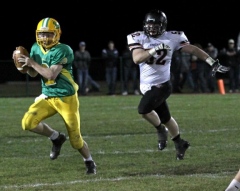 WYALUSING - In the 31st meeting for the Bronze Helmet trophy, the Black Knights did just enough to come away with a 14-7 victory. Out gained in yards rushing, yards passing, and time of possession, a blocked punt returned 25 yards for the go ahead score would prove to be the difference for Towanda.

Both defenses flexed their muscles early, as the teams traded punts. Towanda would get on the board first, gaining good field position at midfield following a short punt. They would cover the distance in nine plays, keyed by a 30 yard run by QB Noah Huff down the left sideline.

Huff finished the drive, sneaking in from 2-yards out on 3rd down, and Tyler Basse added the point after for a 7-0 lead at 8:30.

The Rams would answer right back, taking the ensuing kickoff and traveling 66 yards in 10 plays. Lucas Jennings and Dylan Otis took turns carrying the rock, with Jennings carrying the final 2-yards for the score. Warner Mendoza added the extra point, and the score was tied 7-7 with 3:06 left till half.

Both defenses would again stiffen forcing a punt each before the half expired.

Noah Huff would start the second half with a bang, returning the kickoff all the way to the Ram 35. But 2 penalties and a sack stalled the drive, as they turned the ball over on downs. Wyalusing would also go three and out, but Lucas Jennings punt was blocked, and Dylan Bates scooped it up and raced down the left sidelines for the winning margin with 8:09 left in the third.

The Rams never gave up, traveling 61 yards in 14 plays on their next series. But on 4th and 1 from the Towanda 6, Jennings was stuffed, ending the threat. Their next drive covered 64 yards, chewing up yardage on the ground and eating clock, but on a 4th and nine play from the 18, a halfback pass into the end zone fell incomplete.

Towanda would have the ball for only 11 offensive plays in the second half, as Wyalusing consistently moved the ball but were unable to capitalize.

Lucas Jennings led all rushers with 132 yards on 29 carries and a score, while setting the Wyalusing single season rushing record. Noah Huff led Towanda with 108 yards and a score on 14 carries.

The Rams finish their season 2-8, while Towanda improves to 6-4 and awaits their opponent in the first round of the District IV playoffs next Friday night.