Towanda picks up win over Mifflinburg. 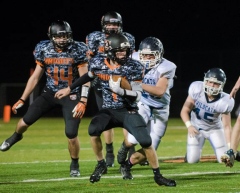 TOWANDA - In a hard fought, physical football game last night, the Black Knights and Wildcats traded punches for 3 and 1/2 quarters.

With Towanda clinging to a 5 point lead, and having just turned the ball over on their own 26 yard line, they needed someone to step up and make a play. That someone turned out to be Junior Noah Huff, as he scooped up an incomplete pass attempt that was ruled a lateral and raced 74 yards to seal the victory over visiting Mifflinburg 28-13.

The Wildcats looked to establish the run early, as they took the opening kick and ran the exact same run play 5 times in a row before the Towanda defense stiffened and forced a punt. Two Huff incompletions and a sack would give the ball right back, as both punters saw lots of action early. Towanda would strike first as Tony Daniello caught a Huff pass over the middle, bounced off hard hits from 2 would be tacklers, and raced 41 yards for the score. The try for two failed, and the lead was 6-0 with 2:48 left in the first.

Mifflinburg would answer right back, traveling 56 yards in 8 plays, capped by an 8 yard run as Cole Walter pushed the pile into the endzone. The PAT was good and the Wildcats led 7-6 with 10:42 left in the 2nd.

The remainder of the half involved lots of hard nosed running and equally hard tackling by both teams. With under two minutes left, Huff would connect on a big throw down the left sideline to Steven Yates at the Wildcat 9. A 4 yard run by Huff was followed by Daniello taking it in from 5 yards out for the score. Again the Knights tried for 2 but were stopped short, and went into halftime up 12-7.

Towanda received the second half kick, but went three and out as rain began to fall. The slick conditions played to their favor, as a Mifflinburg fumble on first down was recovered by the Knights. They would need only one play to cash in as Huff drew the entire defense to his right before throwing back to Daniello on a screen pass that he took 30 yards down the left sideline for the score. The extra point attempt was wide left leaving the score 18-7 with 9:44 left in the third.

Mifflinburg once again answered back, driving 55 yards in 10 plays with QB Jordan Wagner sneaking in on 4th down from inside the one, Their two point try failed, and the lead was now 18-13 with 4:36 left.

Huff would fumble on his first carry of the next series, and the Wildcats began to wear down the Knight defense with punishing runs by Walter and Bingaman. They traveled 71 yard on 18 runs, but were stopped short when the interior of the Towanda defense tackled Walter inches from the go ahead score on 4th down. They would then move the ball out to the 25 before giving the ball back on their second fumble. This set the stage for Huff to scoop up the dropped lateral pass and return it for the final TD, ending Mifflinburg's final threat.

Tyler Basse added a 39 yard field goal to put the icing on the cake, and the Knights upped their record to 4-2.

Daniello led Towanda with 58 yards on 16 rushes, while Huff added 41 yards on 14 rushes while throwing 4 completions for 83 yards. For Mifflinburg, Cole Walter had 118 yards on 21 carries, while Tanner Bingaman added 34 yards on 13 carries. Jordan Wagner completed 8 passes for 119 yards.

Next week Towanda looks to keep their undefeated NTL record intact as they travel to Troy.