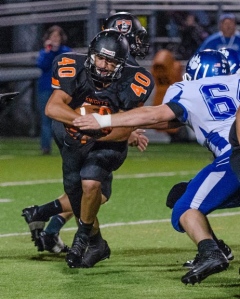 TOWANDA - Homecoming last night in Towanda ended with a 33-0 win over the visiting North Penn Panthers for the Black Knights. It could be said that the win came easily for Towanda, but with multiple flags, fumbles and turnovers, the home team fought their battle in order to out-play North Penn.

The Panthers won the coin toss, choosing to receive, and after a three-and-out, handed the ball over to the Knights. Tony Daniello scored the first touchdown of the night on first and ten when he ran twenty-seven yards into the end zone with 5:57 left in the first quarter. Tyler Basse's PAT was true, and Towanda took the lead, 7-0.

From here, the teams would trade punts up to the end of the first quarter, when Daniello ran in two yards for his second score of the night just as the first quarter was ending. Basse's extra point was good, and Towanda stayed strong, leading 14-0.

At the beginning of the second, a flag thrown on the kick-off and a fumble recovered by Dayton Wickwire of Towanda gave the Black Knights the ball at North Penn's 38. Seven plays later, on second and three, Dan Leljedal ran in for the score three yards with 8:16 left to play in the first half. The extra point attempt failed, but Towanda still held their lead, 20-0.

North Penn's next series ended in a fumble recovered by Towanda quarterback Noah Huff. Towanda answered back with a fumble of their own which was recovered by the Panthers. Quarterback Bo Burleigh of North Penn threw four interceptions in a row, handing the ball back to the Knights on fourth a ten.

Fortunately for the Panthers, Towanda's fumble on the first play of their next series gave them a chance to redeem themselves. But unfortunately for them, Burleigh threw his first interception on the night on third and eight, and Towanda set up at their own fourteen. Three plays later, Huff ran 76 yards with 4:04 to play in the first half for their third touchdown. Basse's PAT was wide left, but the scoreboard read 26-0.

Two more fumbles and a couple flags were what consumed the rest of the first half, and both teams headed to the locker room, the visiting team having yet to put any points up on the board.

Things didn't really get rolling in the second half until only fifty-one seconds remained on the clock. Noah Huff threw a touchdown pass to Dayton Wickwire for twenty-eight yards, and after Basse kicked the extra point, Towanda went up, 33-0. This would remain the final score as both teams went on to punt, and Bo Burleigh threw yet another interception as the fourth quarter was winding down.

Next week, North Penn is at home against Hughesville and Towanda travels to take on Pius X.