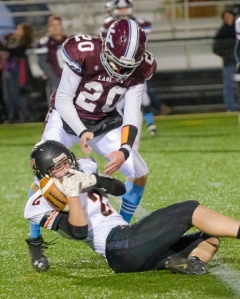 LOYALSOCK TOWNSHIP - The old adage about it being tough to beat a team multiple times during a football season is probably overused and when it is, oftentimes the most important thing that goes into beating an opponent multiple times is overlooked and it is actually quite simple - you must play better than your opponent each time more often than not.

Towanda made the trek down to Loyalsock on Friday for the first round of the District 4 AA playoffs just three weeks after topping the Lancers by one point at home in a game where the Black Knights made more plays than the Lancers and generally outplayed them. This time, however, it was the Lancers that made more plays and generally outplayed Towanda and that spelled the end of the Black Knights' season as Loyalsock topped Towanda 48-20.

"Fundamentally we just weren't as sound (as the first game)," said Towanda coach Jamie Wecker. "We made a lot of mistakes with responsibilities there at the beginning of the game. You have to give Loyalsock a lot of credit - they did things a lot better than they did the first game. They ran the option a lot more this time and lot more successfully and you get Datres out in space and he is tough. They had a nice game plan tonight and we just didn't have an answer for it."

The story of the game was Loyalsock's ground game, specifically that of quarterback Kyle Datres. The two-way threat burned the Knights with his legs on this occasion as he ran for 229 yards and three touchdowns. He ran for 211 of those yards in the first half, which included runs of 47, 52 and 65 yards, the latter two of which were for scores. Loyalsock racked up 407 rushing yards in the game while holding Towanda to just 42.

"We executed. We came out and played physical. The first game, (Towanda) played an incredible game, it wasn't just what we did," said Loyalsock coach Justin Van Fleet. "I often get asked before games 'what is going to win the game' and I always say line play, turnovers and penalties. It's really not complicated and that's what happened today. Our line played very well, we limited our turnovers and limited our penalties."

Loyalsock had 500 yards of total offense for the game, including 315 yards and five total touchdown for Datres, as he also threw for 86 yards and a pair of scores. Towanda was held to just 160 yards of total offense. The Black Knights' best offense of the night came on kickoff returns as Huff had 165 total return yards and as a team, Towanda had 174. That included an 87-yard return by Huff for a touchdown to get the Knights on the scoreboard in the second quarter after Loyalsock had raced out to a 21-0 lead.

"The big difference between the first time we met them and this time is we controlled the line of scrimmage real well the first game and this game we never established the line of scrimmage," said Wecker. "They had us out of our rhythm and then we got ourselves down and we had to come out of our game plan where we like to run the ball. They got us down early and then we had to start doing things we weren't comfortable doing."

Two of those first three touchdowns by Loyalsock came on the two aforementioned long runs by Datres, one of which followed a Towanda fumble near midfield that was recovered by Loyalsock. Just two plays later, Datres found a hole in the defense and took it 52 yards for the score. He would then take it 65 on Loyalsock's next possession after a Towanda punt before Huff's kickoff return made it 21-7.

The Lancers would answer right back on their next possession, however, ensuring that the momentum wouldn't swing to Towanda's favor as they took advantage of a personal foul penalty on Towanda on the kickoff and took possession at midfield. They would then go seven plays on the drive for the touchdown, capped by Datres' third straight score, this one from seven yards out.

The Black Knights would score just before halftime on a nicely executed misdirection play when Huff rolled out to the right before turning around and finding Tyler Vanderpool on the left flank for a 19-yard hookup to cut the lead to 27-13 at the break.

Loyalsock received the kickoff to start the second half and proceeded to march down the field on an eight-play, 69-yard drive - seven of which were rushes - and score again to make it 34-13. This combined with an 11-play drive to end the first half in which they ran out of time saw the Lancer offense on the field for 19 straight plays.

Towanda would score once more late in the fourth quarter as Dan Leljedal was able to sneak behind the Loyalsock secondary and Huff found him in stride for the score at 5:44, giving the senior a touchdown in the final game of his career.

Despite the tough loss to end the season, Wecker was pleased with the overall body of work.

"I'm really proud of our kids as a whole, especially the seniors - they did a nice job," said Wecker. "We went from a three-win season to a six-win season and we played a pretty tough schedule. Our kids played well and didn't quit - even tonight, they played hard until the last whistle. We didn't have the outcome we wanted but the effort was there and the attitude was good."