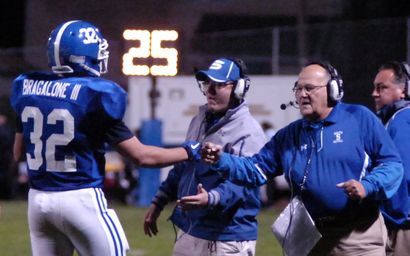 Even before this season began, South Williamsport head coach Chris Eiswerth, knew that Dominick Bragalone was a special player.

That was evident over the summer, when Eiswerth told Bragalone that he wanted him to rush for 2,000 yards and 30 touchdowns this year.

Those were some pretty ambitious goals for an up-and-coming junior getting his first chance to be a premier running back, but after he put up 756 yards with 10 touchdowns in his sophomore campaign, Eiswerth truly believed that Bragalone was poised to have a spectacular year and had the talent to cement himself as one of the elite running backs in our area.

What Eiswerth couldn't have seen coming, though, was Bragalone surpassing the lofty goals he set for him by week eight in the season, making the feat seem almost pedestrian. And he also didn't expect to see Bragalone break the Lycoming County single-season rushing record of 2,547 yards set by Darrell Blackman in 2001, or Gary Brown's county record for single-season touchdowns (39), either.

However, that's exactly what Bragalone did in front of a packed crowd at South Williamsport on Friday night, as the Mounties (9-1) capped their regular season with a, 69-32,trampling of Montgomery (1-9).

Coming into Friday's contest, Bragalone needed 128 yards to reach Blackman's record. That would have been a pretty tall order for most running backs, but not Bragalone. Those 128 yards seemed miniscule in comparison to the 268 yards-per-game average Bragalone maintained through the season's first nine weeks.

No team this season had held him under 160 yards, so Bragalone could have had a bad game by his standards and still have broken the record.

But Bragalone didn't have a bad game.

As he has done so many times this season, Bragalone astonished Mountie fans with another stellar performance, posting 201 yards with 6 rushing touchdowns on a mere seven carries, giving him a grand total of 2,620 yards on the season, which topped Blackman's record by 73 yards.

"I was thinking about someone in a 10-game schedule putting up those kinds of numbers and it's mind-boggling," Eiswerth said on Bragalone's big season. "Its just a credit to Dominick, the team, and our staff."

It only took Bragalone four carries to gain the yards he needed to top Blackman, as he tore off huge chunks of yardage every time he was handed the ball. Just twelve minutes into the game Bragalone had already accumulated 164 yards and scored four times.

His record-breaking run came in the first quarter on a 48-yard scamper to the end zone, which saw him break three tackles before speeding away to leave Montgomery's defense in his dust.

"I was pretty upset I didn't get it last week, so I was trying really hard to get it this week," Bragalone said. "I was confident that I could do it, but I was really worried that I wasn't going to."

After breaking the rushing record, Bragalone kept his historic night going by scoring on a 61-yard pass from Matt Boone, which tied him with Gary Brown for the single-season touchdown record, with 39 scores.

Bragalone and Brown wouldn't stay tied in the history books for long, however, because on the Mounties' first drive of the second quarter Bragalone scored yet again, making him the sole owner of the record.

"It just feels amazing knowing that I broke these records and I hope to keep it going," Bragalone said.

"I have to give a lot of credit to my line, because everything I have done is with the help of them, and I couldn't have done it without them."

With a very commanding lead, Eiswerth decided to sit his starters mid-way through the second quarter, which seemed like the right call for both the safety of his players, and the overall sportsmanship of the game.

But after the Red Raiders spent some time clawing at the Mounties' lead, Eiswerth had a change of heart and stuck his starters back in the game with 5 minutes left in the forth quarter, despite the fact that he was holding onto a 62-32 lead.

Just a few plays later Bragalone found his away to the end zone yet again, and added insult to injury by slam-dunking the football through the uprights, which drew yellow hankies from the referees, but smiles from South's coaching staff.

With their win on Friday, the Mounties earned their second NTL Small School championship in the last two years, and will face Wellsboro at Mansfield University next week in the first round of the District 4 Class A playoffs.