South piles up more big stats and improves to 7-1. 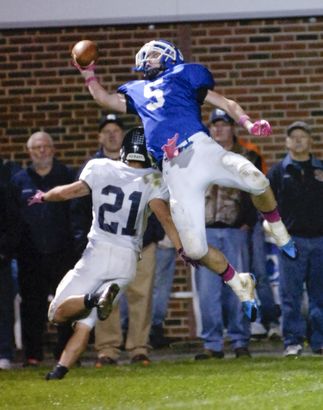 Three of Dominick Bragalone's first four carries on Friday night went for a yard each. The other attempt, however, is the reason the junior running back is having the kind of season that will be remembered for a long time in Lycoming County.

Bragalone scored on a 90-yard touchdown in the first quarter and came within a yard of reaching 300 yards for a fourth consecutive game as the Mounties defeated Muncy, 32-13.

"It's crazy," South Williamsport quarterback Matt Boone said. "He's such a good running back and he never goes down on first contact and is always fighting for extra yardage and when he gets outside he's gone. No one is catching him."

The numbers illustrate that. Bragalone has 30 rushing touchdowns this year and more than 2,200 rushing yards with two regular-season games remaining.

Muncy's defense may not believe the numbers Bragalone accumulated against the Indians when seen this morning. Muncy delivered many solid hits on the 5-foot-11, 200-pound Bragalone, who finished with 39 carries and a reception, and often held the line of scrimmage to a stalemate with an aggressive and attacking style.

"We sold out and if you're going to stop a running back like that you have to sell out at the line of scrimmage," Muncy head coach Jay Drumheller said. "We talked about gang tackling and we did tackling every day this week. They were some big hits on him and he's going to be a sore boy. I was proud of how our guys played."

All the hits though didn't keep Bragalone from leaving Rodney K. Morgans Stadium as a 2,000-yard rusher. He needed just 74 yards to reach the milestone and did so with his 90-yard touchdown run.

South moves to 7-1 overall and gained control of the NTL Small School division as it and Muncy were the only two unbeatens in the division entering Friday night.

Muncy fell to 5-3 overall with games remaining against Sayre and Hughesville. The Indians entered Friday night in fourth place in the District 4 Class A standings, 140 ahead of fifth-place Bloomsburg, which defeated Class AA Mifflinburg on Friday night, 24-13.

Bragalone's 90-yard touchdown run was came on South's first offensive possession, but after it already held a 7-0 lead thanks to a Ryan Foran 84-yard kickoff return to open the game. Foran, a track athlete at South, came out for football for the first time as a senior this year.

"Foran just came out fresh this year and that was a game-changer," South Williamsport coach Chris Eiswerth said.

Trailing 13-0, Muncy didn't go and hide. The Indians collected themselves and scored on a Dakota Nixon 6-yard run to close to within 13-6.

A Bragalone 7-yard touchdown in the second quarter and a Boone 5-yard run on a bootleg in the third gave South a 25-6 lead.

Muncy again clawed back on a Anthony Barberio 1-yard sneak early in the fourth quarter and had a golden opportunity to receive the ball back down just two scores when Riley Hengler made a catch that left the stadium and likely the viewers on statewide television in awe. The 6-3 basketball player ran down the Muncy sideline with Indians cornerback Ken Koch in his hip pocket. Koch, who was giving up several inches, was in good position on the play but Hengler leaped high above the Muncy defender and with one hand snatched the ball to his chest for a key first down on a third-and-11 from the Muncy 48.

"That's the best catch I've seen a receiver make in a high school football game," Boone said. "I thought it was a crowd killer and it paved the way to our victory."

"That Hengler catch was unbelievable," said Drumheller, whose team threw two interceptions and had a touchdown called back in the first half on a fourth-down play. "That is for the record books. It was amazing.

"He doesn't make that we get the ball back and we're only down 12 points. That was a huge play."

John Peters made the catch sting a little more when he scored from 12 yards out after his 7-yard touchdown run on the previous play was called back due to a penalty.

"Hats off to Muncy," Boone said. "They never gave up and they played 100 percent all night. They kept coming up with big hits and made plays here and there that allowed them to stay in the game."