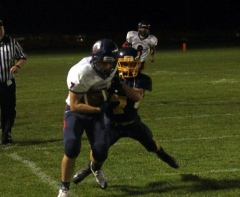 WESTFIELD - With the leaves turning colors and cool nights here, the time seemed right for an old-fashioned slobber-knocker, as John Madden used to say. In a hard-hitting contest, the Redskins defeated the Indians by a 28-14 margin.

Cowanesque Valley put numbers on the scoreboard first after a three-and-out and a seven-yard punt by Sayre. Taking over on the Redskins 48, the Indians moved downfield behind the running of Brandon Whitesell. Cowanesque scored on the sixth play of the drive when James Burn connected with Whitesell on a short pass, allowing Whitesell to race 35 yards down the home sideline for the score. Ethan Mead added the extra point.

Last week, Jeremy Kyc rumbled for 371 yards on 23 carries. This week the Indians' defense swarmed all over the senior runner, who tallied negative nine yards on his first three carries before ripping runs of 17 and 7 midway through the first quarter. However, the nine-play drive finished with a punt near midfield.

Halfway through the second quarter, Cowanesque pieced together a long drive. Facing a 4-and-6 at the Redskins 20, Burns dropped back to pass, but Sayre's Marshall Higley pulled down an errant pass and returned it to the 19-yard line.

After Mark Kirk sacked, Stephen Yanuzzi for a 10-yard loss, Sayre punted and Whitesell returned to kick to the Redskins' thirty-seven. On the next play, Burns mishandled the shotgun snap and Kyc pounced on the ball on their own 39-yard line.

Following a pass interference call, Yanuzzi threw a tight spiral to Kyc over the middle. Kyc tucked the ball away and rumbled 50 yards for the score. James Harbst added the PAT to tie the game.

On their first play from scrimmage after the kickoff, Burns connected with Mead. After gaining three yards, Mead fumbled and Gabe Nobles recovered with two minutes left to play in the half.

The Indians cranked up their defense a notch and Kaleb Rice sacked Yanuzzi for a six-yard loss. After Kyc netted eight yards on run, Yanuzzi was sacked again - this time by Kirk - but a horse-collar penalty gave the Redskins 15 yards and a first down.

With 24 seconds left, Yanuzzi took the snap and threw and incompletion in the endzone.

Now the Redskins found themselves at the thirteen with 13 seconds left to play in the half. Maintaining his cool, Yanuzzi connected with Noble for the score. Harbst added the Pat for a 14-7 lead at the half.

On the opening kickoff of the second half, Mead scooped up the ball at his goal line and raced around until Harbst made a touchdown saving tackle at midfield. However, CV could not take advantage of the excellent field position.

The defenses held tough, but it was special teams that turned the game around. Whitesell dropped back to punt and Derrik Keir came up big with the blocked kick.

The very next play, Harbst took a handoff and tore up the middle for a 45-yards touchdown. After a quick shoe change, Harbst added the extra point.

Once again the defenses controlled the game until, again, special teams came into play when Whitesell pinned the Redskins down at the three on a punt. After three plays, Sayre punted giving the Indians the ball on Redskins' 28-yard line.

Three plays later, Whitesell scored from 14 yards out with 4:13 left in the game. Mead added the extra point to narrow the lead to seven.

After Bradley Hatch's David Tyree-like onside recovery against his helmet, Sayre needed to eat up some clock. The Redskins proceeded to move downfield, feeding the Indians a dose of Harbst & Kyc. After a 25-yard run to the three by Kyc, Harbst scored on the next play to seal the game with 1:32 left.

Whitesell led all rushers with 104 yards and two touchdowns on 24 carries. Kyc led Sayre with 98 yard rushing on 19 attempts while Harbst netted 87 yards on eight carries.