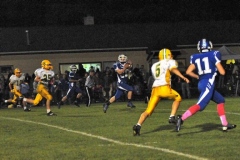 It was a record-breaking night for Bo Burleigh as the North Penn Panthers scored 28 first-half points on their way to a 34-17 win over Wyalusing on Friday.

Burleigh was 14-for-22 for 314 yards and five touchdowns which coach Tom Dickinson believes is a school single-game passing record in the victory.

"Bo was on," Dickinson said. "He distributed it well. They challenged, they put too many in the box for running so we threw over them."

Burleigh started the scoring at 10:34 of the first quarter when he hit Dayton Wood on a 16-yard touchdown. The two-point pass failed and it was 6-0.

At 8:25 Devin Remley hauled in a 39-yard touchdown from Burleigh and the pass failed and it was 12-0.

Wood caught a 69-yard touchdown from Burleigh with 5:23 left in the half and Zaparzynski converted the two-point run as North Penn went up 28-3.

Wood hauled in four catches for 176 yards in the game.

"He just got behind them, a couple times he made a move or two and made people miss," Dickinson said. "They were excited, that might be a school record for receiving."

For Burleigh it was a career day throwing the ball.

"People don't realize, he never quarterbacked last year," Dickinson said. "He was hurt all year. He didn't even take a snap on JV. This is only his seventh game, he's learning and getting better."

Remley hauled in a 23-yard touchdown from Burleigh with 3:14 left in the third and the run failed to make it 34-3.

In the fourth Justin Haley scored on a 12-yard run for Wyalusing and the kick was blocked with 10:30 to go and Lucas Jennings scored on a 21-yard run with 4:34 to go and Dylan Otis ran in the two-point play to make the final score.

"In the first half we had a couple penalties and were backed up," Dickinson said. "Their offense had good field position, it put our defense in poor position, but we held them, bending, not breaking.

"When you are up 34-3 you lose focus and they kept running hard. They ran hard for those touchdowns at the end. We've got to keep our focus for four quarters."

Remley had six catches for 97 yards and Zaparzynski caught two passes for 34 yards.

Zaparzynski gained 62 yards on 14 carries in the game.

Jennings gained 117 on 23 carries for Wyalusing and Otis had 81 on 23 carries, while Haley gained 54 on nine carries.

Haley was 3-for-10 passing for 44 yards. Colin Edsell gained 33 yards on two catches.