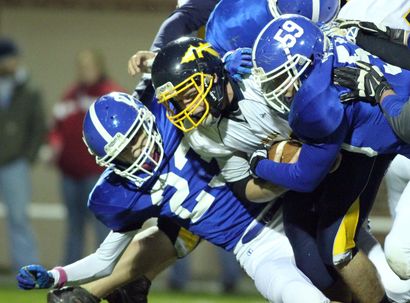 If he hasn't done so already, South Williamsport's Dominick Bragalone should consider buying his offensive linemen a thank-you card when the season is over.

Game after game, carry after carry, the junior running back has been ushered through the line of scrimmage by the Mounties' front five like a wave of Secret Service agents protecting the President, allowing him to pile up some of the most astronomical rushing statistics that our area has ever seen.

That trend continued yet again on Friday, as South Williamsport cruised past Cowanesque Valley, 41-0, while Bragalone added another 188 yards and four scores to his rushing totals, giving him 2,413 yards and 34 touchdowns on the season.

With such a phenomenal stat line, Bragalone has understandably been given a lot of the credit for the fantastic season the Mounties (8-1) are enjoying this year. However, Bragalone is the first to admit that none of what he has accomplished would be possible without the stellar performance of the big guys up front.

"They have been doing a great job blocking, and I need to thank them for everything," he said.

South Williamsport's head coach, Chris Eiswerth, says that the dominance of his offensive line unit is even more impressive when you consider that the team had to start from scratch after losing a big senior class last season.

"I think those guys set the tone last season and showed these guys how to show up and work," Eiswerth said. "But all of these guys really love to come out, run block, and get physical."

One of the big guys who helped open gaping holes for Bragalone and Peters against the Indians was South's 235-pound junior tight end, Tyler Schonewolf, who is the longest-tenured starter on the Mounties line. He has been a fixture up front since his freshman season. Schonewolf says that the cohesiveness off this Mounties offensive line group can be attributed to friendships that exist amongst it.

"It feels great to go out and win by a ton every game, but I think what sets us apart is that we are all really close friends off of the field," Schonewolf said. "We worked really hard the whole offseason together, from January on, and that is showing."

With their win on Friday, the Mounties helped clinch payoff berth in District 4 Class A playoffs for the second time in as many years, and also earned a share of the of the NTL Small-School championship, and have a chance to win that outright with a win over Montgomery next week.

"It is so gratifying to see the kids come out and work as hard as they do," said Eiswerth. "We are one win away from another championship, and our kids have really worked hard for that."

"Now we need to have a good week, close things out nicely, and then have a good showing in the playoffs," he added.