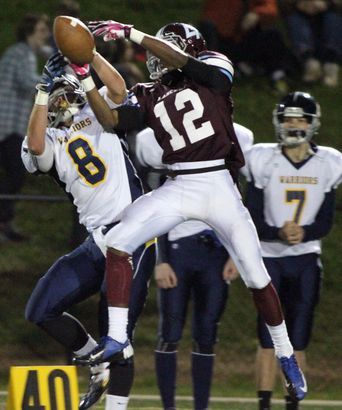 Standing in the bleachers prior to kickoff Friday night, one could see a series of car lights in the distance. One by one the cars pulled into the parking lot outside Kenneth Robbins Stadium before exiting and standing in a huge line that stretched into the darkness. Fans jammed all the stands, the hills and the fence around the stadium simultaneously.

It was the kind of setting reserved for a high-stakes playoff game, not a regular-season football game. Then again, this was no normal high school game. This was Montoursville-Loyalsock. This was the Battle of the Bridge.

That is as big as it gets for these teams and communities. And that is why Loyalsock students stormed the field as jubilant Lancers celebrated last night's thrilling win. Kyle Datres totaled 188 yards and accounted for two touchdowns while Lucas Faubion ignited a tremendous defensive effort as Loyalsock edged Montoursville, 14-10 in a thriller while capturing its first outright HAC-II championship.

"Loyalsock-Montoursville has been here for years and I'm just glad I got to be a part of it. The atmosphere felt like it was a state championship game," Datres said. "We couldn't even get to our locker room because there were so many people. It was a really nice environment and it made it a special game."

"I could not ask for more from our kids, their heart, their fire and their execution. They showed it all tonight," Loyalsock coach Justin Van Fleet said. "Montoursville is a great football team and we were able to play with them and we got the job done at the end."

Loyalsock (7-3, 4-1) ended Montoursville's perfect season and denied the Warriors the HAC-II title since it holds the tie-breaking head-to-head advantage. The Lancers used an 84-yard scoring drive that bridged the third and fourth quarters before making a stand from the 5-yard line late in the game.

Datres ran for two first downs on the ensuing drive, clinching the win. Immediately after Datres took a knee, wide receiver Caleb Robbins raised his arms high in the air and Omar Little literally jumped for joy as students made their way toward the field. Bigger games lay ahead but this was a moment those players will never forget.

"You don't want much more than maybe your last home game being against an undefeated Montoursville team," Loyalsock linebacker Mickey Haller said. "That's the best scenario you could ask for."

"I honestly couldn't write a better script," said Faubion, who had four tackles for losses. "We played a great game tonight. It's one of the best games we ever played."

Despite the loss, Montoursville (9-1, 4-1) still clinched District 4 Class AA's top seed. The Warriors host No. 8 Mifflinburg next Friday while Loyalsock moved up to No. 3 and likely will host Towanda.

Montoursville has overcome four second-half deficits this season and nearly made it five but Loyalsock made a huge stop on fourth-and-1 from the 4-yard line with 5:09 remaining to prevent it from happening again.

"It's gut-check time and we have a great group of young men here. Things have been going our way but tonight they didn't so now we see the other side of it and see how we respond," Montoursville coach J.C. Keefer said. "They're the kind of kids that are going to get back out there and scrap and battle and they're going to use this to get better."

Both teams scored on their opening possessions after Fletcher Quigley and Cameron Ott set up touchdowns with long kickoff returns. It stayed that way until the third quarter when Jim McMahon kicked a 29-yard field goal to put Montoursville up 10-7. The Warriors were starting to take over with their double-tight formation and Ott (155 yards) was carrying defenders as they moved inside the 25-yard line. Datres, though, recovered a fumble on the next play and everything changed.

Starting at their own 16-yard line, the Lancers moved 84 yards on seven plays. Saabir Gibson ignited the drive with a 38-yard run on the first play before Haller extended it with a brilliant one-handed catch for a first down. Datres put Loyalsock ahead 14-10 when he scored on a video-game like 19-yard touchdown run, using a series of nifty moves to turn what looked like it would be a short gain into one of the game's biggest plays.

"They brought their two middle backers right down the middle and I just avoided one and Saabir Gibson took out the other one and I just made something happen," Datres said. "The receivers blocked great downfield and I got off a couple kids and got in the end zone."

Ott returned the ensuing kickoff 56 yards to the Loyalsock 43-yard line and Montoursville began moving downfield as quarterback Griffin Dunne converted a fourth down with an impressive 7-yard run. Three plays later, Montoursville was five yards from retaking the lead, facing a 2nd-and-3 when Faubion made another big play, dropping Ott for a 3-yard loss. Datres made a nice open-field tackle to prevent Alec Rothrock from scoring on the next play while setting up a 4th-and-1.

The ensuing snap was bobbled and Loyalsock's defensive line pounced, stopping Dunne for a 1-yard loss. Five minutes later, the Lancers were celebrating their biggest win yet.

"We had struggled against some other teams and given up a lot of points but Mickey told our team we have to make a statement tonight," Faubion said. "We had to show everybody who we are."

Ott did that too, running for 155 yards and going for 142 yards on two kick returns after missing the last three games because of a high ankle sprain. Montoursville suffered a blow on its last drive when Ott was injured again. He will be evaluated today.

"I feel terrible for him. He's such a great player," Keefer said. "He hasn't played in three weeks, plays the whole game and doesn't look like a kid who was hurt at all."