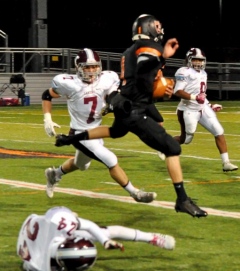 TOWANDA - The Black Knights fought long and hard last night against the visiting Loyalsock Lancers to reel in another victory with a close score of 22-21.

Late in the game Towanda got a touchdown and had a chance to tie with two minutes to go. They went for two-points instead and the risk paid off as they got it.

Not only that, on the ensuing kick-off Towanda did a successful onside kick to kneel out the clock.

"With two minutes left we didn't want (Kyle) Datres to have the ball in his hands," Towanda coach Jamie Wecker explained. "One mistake here and he could go 90 yards. Let's go now, let's force them to play to win as opposed to play for overtime. When leading with two minutes left sort of a limit what the offense can do. We knew they had to kind of throw the ball and try and get into field goal range. We got lucky with the squib kick and we're able to recover it."

The win was crucial for Towanda's playoff chances. Coming in at 4-3 it looked like Towanda needed to beat either Loyalsock or undefeated Wellsboro in the next two weeks to get in.

The win over Loyalsock moves the Knights to 5-3 overall and takes playoff pressure off them as they host the Hornets next week.

"After last week we had sort of a gut check on Monday on where we were at," Towanda coach Jamie Wecker said. "The kids came back had a good week of practice. The kids played with heart and played with pride."

The first score of the night was in favor of Towanda on their first possession. On second and five, with only 3:57 left on the clock in the first quarter, quarterback Huff ran in five yards for the score. Tyler Basse's extra point was good, Towanda led 7-0.

Both teams traded punts in the four possessions to come, running into the second quarter. Until, finally, the Lancers upped their game before the second half was over. A pass from quarterback Kyle Datres to Omar Little, who ran 60 yards into the end zone, gave Loyalsock their first points of the night. Kicker Austin Champion's PAT was true, and the Lancers and the Knights were now tied, 7-7.

On Towanda's next possession, things went their way. A roughing-the-kicker penalty on the defense gave the Knights the ball on the 50 yard line. Nine plays later, Dayton Wickwire pounded out the two yards needed for the score. Basse's extra point was again true, and Towanda extended their lead, 14-0 with fifty seconds to play in the second quarter.

The Knights' first possession of the second half looked promising, until Huff was sacked for a loss of three yards and then threw a pass that was intercepted by Fletcher Quigley. Loyalsock brought the tie to the scoreboard as they answered quickly with their successive 7 points. On third and four, Datres weaved through the defense and into the end zone with 4:34 left in the third quarter. Champion's kick was good, and the game was tied again, 14-14.

With some new momentum, Loyalsock found it in them to put some more points on the board. After a punt from Towanda, they set themselves up at the Knights' fourteen. An illegal block in the back on the offense and thirteen plays later gave senior Mickey Haller the chance to run a two yard touchdown play with 7:54 left in the game. Austin Champion's extra point was good, and Loyalsock took their first lead, 21-14.

With the chance of making districts on the line, Towanda held nothing back on their next possession. Huff and Daniello took turns running the ball, but on third and four, it was Daniello who scored. With two minutes left, he dragged defenders with him into the end zone for the touchdown. The Black Knights decided to go for two, and after succeeding, they regained their lead, 22-21.

An on side kick gave Towanda the ball back again with under a minute left. On first and ten on their own fifteen, Huff took a knee to lock in the victory.

"We had long drives, we held onto the ball, we didn't make mistakes, defensively we were very physical and the kids played well throughout the four quarters," Wecker said. "One thing I was really happy with the defense. You are not going to stop a kid like Datres, the defense did a nice job forcing him to stay in the pocket, the kids played real fast tonight. We kept him under control."

The Knights take on Wellsboro at home next week and Loyalsock travels to Lewisburg. While the playoff pressure may be off for Towanda they will be playing for a shared NTL title when they host the Hornets next Friday.