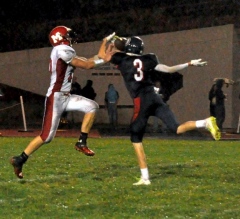 SAYRE - With his offense struggling in back-to-back losses, Sayre coach Larry Hanafin went back to the drawing board.

He scrapped a Wing-T style offense in favor of the power-I and the decision paid instant dividends with senior tailback Jeremy Kyc rushing for 361 yards and five TDs in a 31-7 Homecoming win here Saturday night at a rain-soaked Lockhart Street Bowl.

"We put our heads together and figured out who we could put where to make us most effective," he said. "The assistant coaches did a lot of coaching throughout the week and players worked hard.

We've been down and the resiliency of these boys is something else," added Hanafin. "It's why you coach and it's what's great about high school sports."

"When you're switching offenses, you can't put all the plays in, in one week.

"We were in a corner here. This was a crucial week for us," said Hanafin. "We had to look at who is our guy and where can we go with him? It was no more complicated with that.

"(Kyc) plays so hard, whether he has the ball or not. He's just gonna go 110 percent regardless," added Hanafin. "He had a great game."

The constant, and sometimes heavy rains, resulted in a combined 10 fumbles by the two teams with seven of them resulting in a change of possessions.

Special teams triggered Sayre's opening score when J.P. Harbst's opening kickoff rolled dead at the Montgomery 1 and the Redskins coverage team hemmed in the return at the 4-yard-line.

After a three-and-out and the resulting punt, Sayre took over at its 39. Overcoming an illegal procedure call, the Redskins went the distance in five plays with Kyc covering the final 15 for the score.

After another defensive stop, Sayre took over at its 32. Moments later, a botched pitch gave Montgomery the ball at the Redskin 39.

On fourth-and-inches at the Sayre 29, Damion Bidlack led a Redskin gang-tackle to stop Montgomery's Tyler Betz short of the first down.

Four plays later, on a 3rd-and-17 play, Kyc broke a tackle at the line-of-scrimmage, darted outside and raced 61 yards down the visitor's sideline for the score to make it 13-0 with 11:01 left in the half.

After the teams exchanged fumbles, Kyc picked up a nice block on the edge by Jay Green and raced untouched 65 yards down the visitor's sidelines for another score to put the Redskins up 19-0 with 5:17 left in the first half.

On the first play of the second half, Kyc slammed off the left side of the Sayre offensive line and raced 65 yards for a score to make it 25-0.

Montgomery's lone score of the game came in the final minute of the third quarter and was the result of a 14-play, 49-yard drive that chewed up six minutes and 28 seconds off the game clock.

Three plays after the ensuing kickoff, Kyc busted loose on his final TD scamper of the evening, a 55-yard run up the middle with 11:08 remaining in the game.

Overall, the Redskins rushed for 368 yards on 42 carries, while senior Stephen Yanuzzi completed both of his pass attempts - both to sophomore Marshall Felt - for 23 yards in his first varsity start.

The Sayre defense forced five turnovers, including interceptions by Green and Marshall Higley.

Betz led Montgomery with 91 yards on 25 carries as the Red Raiders rushed for 156 yards on 47 carries.

"The kids stuck together," said Hanafin. "They played well and helped each other achieve success. I'm happy for every kids on this team, they earned it."