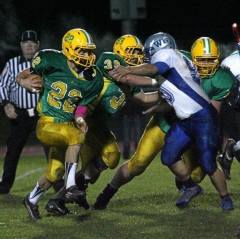 WYALUSING - The Wyalusing Rams got off to a fast start on their way to overwhelming the visiting Warrior Run Defenders in a lopsided 55 - 13 victory.

Wyalusing running back Luke Jennings ran to a career night in the win, scoring four touchdowns on the ground and one defensive touchdown while running the ball 29 times for 257 yards.

"We had awesome blocking, there were great holes all night," Jennings said. "Our team played nose-hard football."

The Rams scored the first touchdown on the night when Dylan Otis punched the ball in from six yards out. Warner Mendoza added the extra point to make the score 7-0 with 10:21 to play in the first quarter.

After forcing a Warrior run three-and-out, Wyalusing put together an eight play drive, capped off with Jennings scoring on the ground from 20 yards out. Mendoza missed the extra point to make the score 13-0 with 5:21 to play in the quarter.

After recovering a fumble from botched Warrior Run snap, the Rams used three plays to punch in their third touchdown, this one coming on a seven yard Jennings run. Otis rushed for the two-point conversion, making the score 21-0 at the end of the first quarter.

After forcing Warrior Run to turn the ball over on downs, Jennings again made light work of the Defenders, switching fields and picking up 42 yards to set the Rams up at the Warrior Run fifteen-yard line. Two plays later, Jennings punched it in from three yards out. Mendoza's kick made the score 28-0 with 10:08 to play in the first half.

On the ensuing Defenders drive, A Warrior Run fumble bounced into Jennings lap before he took it 28 yards back to the house. Mendoza's kick made the score 35-0.

Warrior Run would get on the board before the end of the first half though, with quarterback Hunter Raup finding receiver Matt Gummo in the corner of the endzone for the fourteen yard touchdown strike. Frank James added the point after to cut into the Rams' lead, 35-6.

The Rams extended their lead back to five possessions before the halftime horn sounded, as Jennings found room to score his fifth touchdown of the night from two yards out with fourteen seconds to play in the first half. Mendoza's kick was blocked, making the halftime score 41-6.

Warrior Run wouldn't roll over yet, as they used their first possession of the second half to march 50 yards, capped off with Sean Morehart scoring from nine yards out. James' extra point made the score 41-13 with 7:01 to play in the third quarter.

The Rams' responded yet again, with Otis picking up his second score of the night from one yard out. Mendoza's kick made the score 48-13 with 1:57 left in the third.

For good measure the Rams scored again in the fourth quarter, this score coming on a five yard Otis dive up the middle. Mendoza converted the extra point, sealing the final score at 55-13.

"We preached to our guys all week that if it weren't for five points we could be a 4-4 team," head coach Jim Buchman said. "Everyone has stayed mentally tough and we didn't give up at all."

Warrior Run will travel to play Southern Columbia next week and Wyalusing will play host to Towanda.