Canton runs away from Athens. 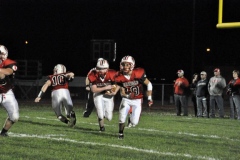 CANTON - The Canton Warriors exploded in the third quarter on their way to pull away against the visiting Athens Wildcats 34-10.

After the first half ended in a close battle with the Warriors up 13-3, Canton's Tyler Cole returned the second half kickoff 95 yards for a touchdown to start a 21-0 run to put the Wildcats away for good.

Canton struck early to begin the game as well, as quarterback John Bowman scrambled for 67 yards on a third-and-thirteen before finding room three plays later to score from 26 yards out. The ensuing two point conversion failed, and the Warriors led 6-0 with 7:32 to play in the first quarter. Bowman finished the game with seventeen carries for 159 yards and three touchdowns, and he completed five of his eleven passes for 62 yards.

After stalling the Wildcats' first possession of the night, Canton picked up right where they left off, as Cole scored from four yards out on the seventh play of the drive. Brian Jannone's kick was good to put the Warriors up 13-0 with 3:21 to play in the quarter. Cole finished with ten carries for 27 yards and two touchdowns, one rushing and one special teams.

After trading punts, Athens was finally able to get on the board in the second quarter, as standout kicker Troy Stivason nailed a 39 yard field goal with 9:45 left in the first half.

The Wildcats tested Stivason's leg again on their next drive, this time with Stivason coming up short on a 49 yard field goal attempt with 7:07 left in the half.

Canton looked to be summoning a scoring opportunity later in the second quarter, but Stivason picked off a Bowman pass on the Wildcats five-yard line to keep the score 13-3 headed into halftime.

With Jannone connecting on the extra point after Cole's opening kick return touchdown, the Warriors led 20-3 with 11:47 to play in the third quarter.

Athens continued to struggle through the air on their next drive as Mason Moore intercepted an Aaron Barry pass to set the Warriors up with a first-and-goal from the nine. Two plays later, Bowman trotted in for his second touchdown of the night. Jannone's kick put the Warriors up 27-3 with 10:12 to play in the third frame. Barry completed nine of his 25 passes for 58 yards and one interception on the night.

After both teams failed to move the ball on successive drives, Canton got on the board again. Bowman scored his third touchdown on the night from three yards out after an eleven play, 51 yard drive. Jannone's kick was good to give Canton the 34-3 lead with 10:37 to play.

Athens wasn't done yet, as Kalen Keathy found room to pick up a 35 yard touchdown to score the last points of the game. Stivason's kick was good, making the final score 34-10.

"Athens is a very well coached team," Canton head coach Jay Perry said. "It's been a long time since we've beat Athens so our kids used that as incentive, and in the second half we put together a complete game."

Athens will host Wyalusing next week and Canton will host Cowanesque Valley in their homecoming football game.