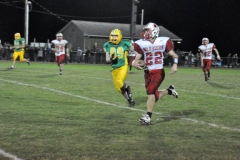 WYALUSING - The Canton Warriors came from behind to score their first win on the season with a 29-28 victory over the Rams in Wyalusing last night.

Down 28-21 with 2 and half minutes left, Senior wide out Jessie Lattimer got behind the Ram defense and QB John Bowman connected with him for a 67 yard bomb to bring the Warriors within one. Canton's first year coach Jay Perry didn't flinch and called a direct snap to Tyler Cole who busted in for the 2-point conversion and the win.

The Rams led throughout the game, scoring first as Lucas Jennings ran off the left side for 24 yards with 4:02 left in the opening quarter. Warner Mendoza's kick made it 7-0. Canton would respond two series later as workhorse Tyler Cole pounded in from 3-yards out to knot the score at 7-7 at the 5:50 mark of the 2nd. They followed it up by marching to the Ram 23, but a 40 yard field goal attempt by Brian Jannone was wide right. Wyalusing would strike right back with a 75 yard catch and run from Justin Haley to Lucas Jennings, Mendoza's second PAT sent them into the half up 14-7.

Receiving the second half kick off, the Rams increased the lead on a 12 play 75 yard drive, capped by a 14 yard run by Dylan Otis. Ram head coach Jim Buchman decided to go for two, but Otis was stopped short and at 6:27 Wyalusing led 20-7.

Answering right back, Jennings busted off a 59 yard run, and this time the two point conversion was successful as Jennings ran it in from 3-yards out to make it a 2 touchdown lead 28-14.

Canton started off the 4th quarter with a 12 play drive of their own, aided by a fake punt on 4th and 10 from their own 44 which Chase Pepper ran for 20 yards. Bowman would finish the drive with a 5-yard completion to Tyler Cole for the score, making it 28-21 with 9:56 left.

Needing to run out the clock, the Rams were able to put together a nine play drive, but stalled on the Canton 23. From there, the Warriors began throwing the ball and calling all of their remaining time outs in an attempt to get into scoring position. But with 2:27 left and no timeouts remaining, they faced one final chance with 4th and 12 from their 33. Inexplicably, Lattimer was able to get wide open behind the Ram pass defense to haul in the game winner.

Bowman led Canton on 11-27 passing with 194 yards and two TDs. Cole was the workhorse carrying 17 times for 98 yards and a score. Lattimer caught three passes for 127 yards and 2 scores.

For Wyalusing Lucas Jennings carried 27 times for 187 yards and two scores, while Justin Haley was 3-for-5 passing for 77 yards and a score.