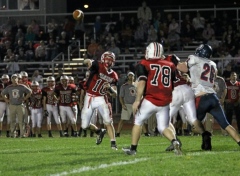 CANTON - For the Canton Warriors, the second time is the charm. Their 16-6 defeat over the visiting Sayre Redskins marked their second home game under the lights of the season.

Although the kick-off and opening drive were a bit slippery, Canton regained their footing later in the game to lock in a victory.

A re-do on the opening kick-off with two illegal procedures tossed in there was what ended up giving Canton the ball on their own 33. Play number one is where the Warriors started to slip up; quarterback John Bowman found himself being sacked on first and ten for a nine yard loss, bringing Canton to second and 19 on their own 24. Three illegal procedures later, and on fourth and a long 13, Chase Pepper delivered a 45 yard punt to set Sayre up at the Warriors' 23 yard line.

Sayre's possession was cut short due to a three-and-out, and Canton fumbled seconds after receiving the ball again.

With Sayre on Canton's five yard line, and with 7:44 left to play in the first quarter, the Warriors scored a safety and went up 2-0.

Both teams traded punts again going into the second quarter.

On fourth and four a couple possessions into the second, Canton attempted to extend their lead with a 36 yard field goal, but the kick was wide right.

The Warriors kept their head up and came back full force on their next possesion and on third and goal, Bowman ran in four yards for the touchdown, making the score now 9-0 with 3:40 left to play in the half.

With the clock for the first half winding down, Canton decided to try for another field goal, but again, it fell wide right and both teams headed for the locker room with the score still locked in at 9-0.

The second half brought more heartache for the Redskins, but there was also a bit of rejoicing. On their third possession, James Harbst ran in five yards for the score to cut the Warriors's lead to 9-6 after the extra point attempt failed.

A Canton three-and-out and then a Sayre fumble set Canton up at their own 34 to begin the fourth quarter. Six plays later, Tyler Cole ran in two yards for the touchdown with 9:52 left in the game. Brian Jannone's extra point was good, and the final score was set, 16-6.