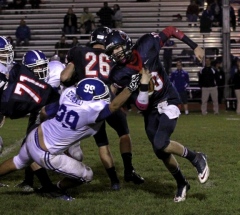 And the Redskins found out quickly as Bragalone scored on a 64-yard scamper on the second play from scrimmage in South's 47-12 win here in NTL Small School football action at the Lockhart Street Bowl.

Bragalone ran for 271 yards and four TDs on just nine carries in the first half alone. He finished the game with 327 yards and five TDs on just 13 carries.

"That kid is the real deal," said Sayre coach Larry Hanafin. "If you don't stop him in the backfield, he's gone.

"I believe his speed was a bit surprising to our kids. He was by us before we realized he was shifting gears.

"He's one of the top running backs in the State," added Hanafin. "We haven't had anybody do that to us in a long time. Hats off to them."

"Their offensive line is well-schooled, they are a well-oiled offensive machine," noted Hanafin.

Bragalone struck again on South's second possession, busting loose on a 66-yard TD run right up the middle for a 12-0 lead.

The Redskins answered with a scoring drive of their own, highlighted by runs of 15 and 22 yards by Jeremy Kyc. Senior QB Derrick Keir capped the drive with a 2-yard TD run to cut the deficit to 12-6.

The Mountaineers responded with another scoring drive, capped by Bragalone's 10-yard TD run. He also tacked on the two-point conversion to make it 20-6.

Sayre answered back with a 13-play drive deep into South's territory, but turned the ball over on downs at the 10.

Bragalone needed just one play to find the end zone again, breaking free through the middle of the line and then beaking to the outside and racing down the Sayre sideline on a 90-yard TD run to make it 27-6 with 10:15 left in the first half.

The Redskins put together another good drive and scored on an 18-yard TD pass from Keir to Jay Green, who made a leaping catch over a South defender in the end zone, to cut the deficit to 27-12.

"I was very happy with our play offensively," said Hanafin. "We've been a little bit patchwork on the line, but they communicated and gelled tonight.

"If you can get the back running back to their side of the line-of-scrimmage before he has to cut, the advantage is to the ball carrier. We did that several times tonight.

"J.P. Harbst ran the way a fullback should run and (Jeremy) Kyc was Kyc - he was outstanding," added Hanafin. "But a lot of credit goes to the offensive line. They came off the ball and gave the backs a chance to do their thing."

Although Hanafin doesn't bring it up without being asked, the number of players on the sidelines on crutches and in civilian clothes made it obvious the Redskins were short-handed.

"We play with who we have and our kids give everything they have. We make no excuses about anything. It's how we feel we have to go about things.

The Redskins were also playing with heavy hearts after junior high head coach and assistant varsity coach Mike Esposito passed away over night.

"It was a very surreal day. We were these kids all day and communicating with a lot of them all night.

"Espo was a coach, but anything that needed to be done, Espo did it," said Hanafin. "Some of the kids were shaken to the absolute core. He's been their champion since they were in T-ball and they know it. It was a like a death in their own family.

"That's why I admire these kids. They could have used that as an excuse, but they chose not to," added Hanafin. "This was a testament to Espo tonight. They could have laid down, but they fought their way out of a funk and played hard until the final whistle."

The final whistle sounded a little quicker than usual as the Mountaineers scored three times in the third quarter, including Bragalone's fifth TD run and a fumble return for a score, to take a 47-12 lead to invoke the "mercy rule."

South Williamsport QB Matt Boone completed 5 of 9 passes for 89 yards in the game and had a 1-yard TD run in the second half, while Keir completed 2 of 6 passes for 26 yards and was intercepted once.