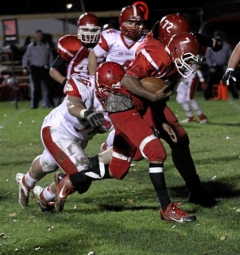 Troy was able to overcome a slow start to run over Mt. Carmel 24-15 in the first round of the District IV, Class AA football playoffs Friday.

"It's my biggest win as a coach," Troy coach Jim Smith remarked. "I'm proud of the kids."

"It's huge for our program, it's big for our town" senior quarterback Jed Wright added. "We're just looking to keep it rolling."

Despite Mt. Carmel's strong reputation Smith believed his team had the edge coming in.

"I felt like we were the better team," he said. "I felt like they probably overlooked us a little bit because of where were at but we've got a strong league, we've got a good football team. We're going to be ready to go next week."

The Trojan's were strong on ground, especially in the second half, when they rattled off 213 of their 336 rushing yards.

Wright led them with 171 yards on the ground off 21 carries while Diante Jones added 100 yards on 15 carries. They had two touchdowns each.

"That was outstanding," Smith said about his two top rushers.

He was especially pleased with the younger of the two, Jones, who is just sophomore.

"I'm so proud of those kids. Diante's a young guy, he's got a bright future in front of him. It's a pretty exciting thing for him, I'm sure."

For Jones, he was excited, too.

"It was the biggest win I've ever had in my whole football career," he remarked.

As for the senior Wright, it was just another day at the office.

"This is an every game thing for him," Smith said.

The first quarter was a defensive battle.

Neither side yielded much but the Red Tornadoes got the first big break when they had a punt go 63 yards, pinning Troy inside their own 5-yard line.

The Mt. Carmel defense forced a Troy punt but it only went 10 yards, giving the Red Tornadoes a prime spot on the Troy 18 yard line.

Two plays later Christian Kelley ran a sweep down to the Troy 1-yard line where Mt. Carmel quarterback Zach Wasilewski punched it in on the next lay.

Dominic Farronato added the point after to put Mt. Carmel up 7-0 with 11:39 left in the half.

The two sides traded punts until late in the quarter when Troy got their offense moving. A 12-yard run by Josh MacClaren put the Trojans in Mt. Carmel territory.

From there they nickel and dimed their way down to the Red Tornado 21 yard line but Jones fumbled the ball away to Mt. Carmel, ending the threat.

Troy would force a Mt. Carmel punt and then would be forced to a punt of their own.

But this time the ball bounced their way.

MacClaren got off a high 47 yard kick that was fumbled by Mt. Carmel's returner. Jones picked the ball up and returned it to the endzone, seemingly tying the game up.

"It felt great," Jones said about redeeming himself.

However, it was ruled Troy couldn't advance the ball even though they got possession on the Red Tornado 29 yard line.

With short time they went to the air as Wright hit Brandon Mattocks for a 5-yard gain. As he was tackled out of bounds Mt. Carmel was called for a late hit, moving the ball to the 11 yard line.

Wright followed with a six yard run to the five, then two plays later Jones found a seam to the endzone, scoring with 7.1 seconds left to play.

Mt. Carmel blocked the point after to preserve their 7-6 advantage going into the half.

Troy had outgained the Red Tornadoes 128 yards to 62 but only had six points to show for it but they didn't panic.

"We're always slow starters," Wright said about their first half play. "We had the confidence we were going to get it rolling."

"That's how it's been all season," added Jones. "We just came out second half and took advantage of it."

In the second half both teams traded punts again followed by Troy once again finding their rhythm on the ground. Rushes of four, eight, seven plus another 15 yard personal foul penalty against the Red Tornadoes put the Trojans inside the Mt. Carmel 20 yard line.

Wright then found an inside seam and rushed it in from 18 yards out to give Troy the lead.

"It was just open field," he said about the touchdown run. "I took it."

Mt. Carmel went 3-and-out on their next drive.

Troy then got another standout run, this time by Jones, who, on the third play from scrimmage, ran left and found a hole for a 46 yard touchdown run.

"It was amazing," Jones said about the run. "I just thank my linemen for them."

The 2-point conversion was stopped again but the Trojans had a comfortable 18-7 lead with 2:36 left in the third quarter.

The Red Tornadoes went 3-and-out again and this time it looked like Troy would shut the door.

A 25-yard run by Wright put them inside the Mt. Carmel 10 yard line. Two plays later Mattocks looked like he would punch one it but the Red Tornadoes caught a break when he fumbled the ball.

Mt. Carmel took over on their own two yard line and immediately went to work keeping their window open.

On the first play from scrimmage Wasilewski hit Treyvon White for a 57 yard gain. Then after completions of nine and 14 yards they were down inside the Troy 25 yard line.

The Trojan defense stiffened, forcing them into a 4th and 13 but Wasilewski hit Farronato for a 22 yard gain to keep the drive alive. Two plays he found Tyler Thompson for a 10 yard touchdown run.

Wasilewski then hit Kelley for the 2-point conversion, cutting the Troy lead to 18-15 with 6:06 left to play.

Instead they got another big run.

Two plays into their next drive Wright once again had a big run. He saw a familiar sight, an open middle, and went 65 yards for the touchdown with 5:09 left to play.

"It was the same thing," he described.

The extra point was blocked again but the Trojans had their two score lead, 24-15.

From their they got interceptions by Mattocks and Kyle Jackson to help run out the clock and punch their ticket to Montoursville.

Wasilewski was just 9-for-27 for Mt. Carmel was the victim of six drops. He threw for 142 yards with a touchdown and the two picks.

On the ground Troy held the Red Tornadoes to just 73 yards on 20 carries with Panko leading the way, carrying the ball nine times for 30 yards.

Through the air White had four catches for 72 yards.

Now the Trojans will travel to top seed Montoursville, who beat Mifflinburg 27-10.

"They're a really good football team," Smith said. "We've got to have a really good game. If we clean some things up on special teams we'll be alright."