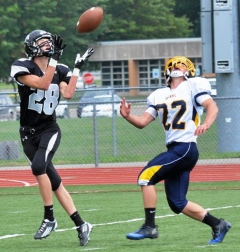 The Wildcats jumped out to a 28-0 halftime lead en route to an historic 35-16 win over Cowanesque Valley here in a rare Saturday morning start at Alumni Field.

The win was the 500th in program history for Athens.

"It's big," said an emotional Young after the game.

While the win was historic, Young also said it was "a little bit ugly."

"The bottom line is you have to be able to win ugly and today was a little bit ugly," said Young.

"Hats off to CV, they battled. I told our kids, they would come here to fight," he added.

Special teams set the tone early in the game for the Wildcats. After a defensive stop on CV's first possession, Athens blocked the punt and Darren Butters pounced on it in the end zone. Troy Stivason's PAT made it 7-0 less than two minutes into the contest.

Late in the first quarter, Troy Stivason, who completed 7 of 17 pass attempts for 111 yards and two TD, capped off a scoring drive with an 8-yard pass to Adam Hunsinger.

Midway through the second quarter, Brandon Sturzenegger bulled in from 2 yards for a TD. Stivason's PAT made it 21-0.

With 1:26 remaining in the first half, Athens back-up QB Aaron Barry scored from 1 yard out on a sneak to extend the lead to 28-0 at the half.

Cowanesque Valley broke up the shutout midway through the third quarter on a 50-yard TD run by Brandon Whitsell to cut the deficit to 28-8.

Late in the third quarter, Colton Roan made a nifty catch, keeping his feet in-bounds as he was falling, on a 7-yard TD pass from Stivason. Stivason, who was 5-for-5 on extra points, capped the Athens scoring with his PAT to make it 35-8.

The Indians final score came on a bit of trickery, a 43-yard halfback option pass to Nathan Mead with 6:46 remaining in the game.

"We got a little sloppy in the second half, but the bottom line is we got the W," said Young.

Tyler Forbes led Athens with 145 yards on 18 carries, while Zane Vargason added 30 yards on three carries and Sturzenegger had 28 yards and a TD on 12 carries. In all, the Wildcats had 241 yards on the ground on 45 carries.

Hunsinger led the Wildcats with three catches for 63 yards and a TD and Cody Cain had two catches for 28 yards.