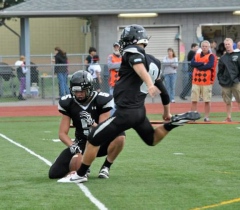 For Athens senior Troy Stivason there were plenty of options when it came to picking a college.

The Wildcats standout kicker had a scholarship offer from the University at Buffalo and he was going to receive and offer from Cincinnati.

While the idea of a football scholarship had its appeal, the dream of playing football at Penn State was always on his mind and in the end Stivason decided to accept a walk-on spot with the Nittany Lions.

"It was obviously hard passing up a scholarship, but it was even harder to pass up playing at a place that means so much to me like Penn State," Stivason said. "It's an incredible opportunity and I thank God for giving me the chance to play for a program that I have idolized from such a young age."

In the end Stivason considered Buffalo, Cincinnati and also Akron and Texas Tech, but the chance to play for a program he grew up watching and to compete near his friends and family made Penn State the choice.

"The support that I've had the past couple months from my family, friends and coaches was just incredible," Stivason said. "And, knowing that they'll always be there to support me thorugh college and wherever else my career may take me means the world. It's huge."

With Penn State kicker Sam Ficken being a senior next year Stivason knows that there will be a chance to compete for a job by his sophomore year, but he also knows he has to work hard if he wants a shot.

"The fact they do have a kicker who will be a senior next year is definitely something that attracted me, but I still have to keep busting my butt day in and day out to hopefully achieve that starting spot towards the beginning of my career."

Stivason also knows if he does well he has a shot to one day earn a scholarship at Penn State.

For the Athens senior the idea of kicking for a Division I school is something exciting.

"D1 football is unlike any other level," he said. "I could watch a hundred games before I turned on a pro game. Being able to play D1 football seems almost surreal to me. At the beginning of the whole process I always had in the back of my mind that I could play at this level and then the past few months has proved to me that if you work hard enough you can truly do anything."

With his decision made Stivason knows it helps ease a little of the pressure during a season in which he hasn't had a lot of field goal chances, but he doesn't intend to stop working hard.

"Only having one field goal on the year is tough, but I know I proved a lot last year and in my opinion I've become a much stronger and more consistent kicker and punter," he said. "It takes off some pressure, but I still know I have to go out and perform to my ability for the brothers I play with every day."