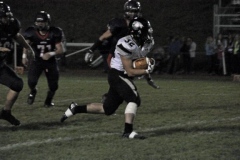 SAYRE - Athens made big plays at key moments in pulling out a 15-12 win over Sayre here Friday night in NTL football action at the Lockhart Street Bowl.

The win is the 13th straight for the Wildcats in the "Rusty Rail" rivalry game.

Defenses ruled the majority of first quarter as the first four possessions featured three first downs, three punts, a turnover and 56 yards of total offense combined for the two teams.

The Redskins offense revved into high gear in their third possession, marching 72 yards on 16 plays in eight minutes and nine seconds to take a 6-0 lead.

Sayre benefited from a pair of offside calls against Athens, converted a fourth-down near midfield on a fake punt and recovered two of their own fumbles. Kyc carried the ball nine times for 47 yards in the drive and capped the drive with a 5-yard TD run.

The Redskins gambled on the extra point with a direct snap to kicker J.P. Harbst, who raced around right end and appeared headed into the end zone, but Wildcat defensive back Stag Shadduck came up with a big hit near the pylon to stop the conversion.

Athens' next possession ended with a Troy Stivason 49-yard punt, pinning the Redskins at their own 1.

Sayre worked its way out of the shadows of its own goal post and ended up running the final 4:41 off the clock to take a 6-0 lead to the intermission.

The Redskins gained 116 yards in total offense in the first half, compared to just 33 for the Wildcats, and ran 31 plays to Athens' 12.

"Sayre is a tough group," said Athens coach Jack Young. "They were better and tougher than us in the first half, especially up front.

"That's what we focused on at halftime. We told our guys we needed to be better and tougher up front and we were.

"We executed our running game and did what we talked about all week," added Young.

Midway through the third quarter, sophomore QB Aaron Barry connected with Troy Stivason on a 36-yard pass to put the Wildcats in scoring position at the Sayre 9. Two plays later, Barry snuck in from 1 yard out to tie the game at 6-6. Stivason booted the extra point to give Athens a 7-6 lead with 4:39 remaining in the third quarter.

Sayre answered immediately with a 54-yard TD run by Kyc to cap a quick five-play, 78-yard drive to take a 12-7 lead. Kyc ended the game with 181 yards and two TDs.

The Wildcats' next possession ended in disaster when a fake punt was snuffed for an 8-yard loss and the Redskins took over at the Athens 27.

The Redskins appeared poised to add to their lead, but Tyler Forbes picked off a Derrick Keir pass at the 5-yard line.

A penalty on Forbes' return moved the ball back to the Athens 40, but Brandon Sturzenegger ripped off consecutive runs of 11 yards and then a 7-yard run to move the ball to the Sayre 31.

Six plays later, facing a fourth-and-3 at the 20, Sturzenegger bounced a run around right end and raced 20 yards for a score to give Athens a 13-12 lead. Forbes tacked on the conversion to make it 15-12 with 5:37 remaining in the game.

The Redskins took the ensuing kickoff and picked up a pair of first downs, but turned the ball over on downs at midfield with just 49 seconds left in the game.

Sturzenegger led Athens with 148 yards on 23 carries and Barry completed 3 of 4 passes for 59 yards.

"I wanted to throw the ball more, but when I got thinking about the old saying 'when you throw the ball three things can happen and only one is good,'" said Young. "(Sayre) was controlling the ball in the first half and I didn't want to give it back to them. We needed to control the ball.

"Our offensive line stepped it up in the second half," he said. "(Fullback) Jordan Alliger has been struggling this year and hasn't been healthy, but he came out and blocked great tonight.

"And, Brandon Sturzenegger, wow," add Young. "There were some efforts out there that was just pure will."

"We liked how the game was going.

"We were in the lead and it was a slow, methodical game - a typical Sayre-Athens slugfest," he said. "We don't feel bad about anything we did.

"Athens just came up with the plays and they won the ball game," added Hanafin. "Kudos to them."

Hanafin ranks the loss with the toughest he's suffered during his tenure at Sayre.

Both coaches expressed pride in their team after the game.

"I couldn't be prouder of a bunch of kids - their will and determination," said Young. "I think a lot of people thought this was the year (the Rusty Rail) was going back, but it's not going back."

"Our guys played as tough and as hard an they could have. I couldn't be more proud of our team," said Hanafin.