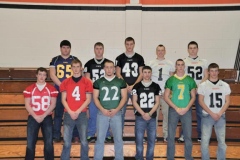 It was one for the record books in Waverly and Tioga this football season. Both squads made it to the state semi-finals, the furthest in school history.

Tioga's Cody Bennett is The Daily and Sunday Review All-Region Player of the Year after his eye-popping rushing numbers in the playoffs. The Tioga coaching staff led by Nick Aiello is the Coaching Staff of the year.

Waverly quarterback Zach Cooney is the Offensive Player of the Year with his strong passing numbers that included over 25 touchdowns through the air this season.

Fellow Wolverine Jon Duval is the Defensive Player of the Year as he anchored the tough Waverly squad.

Towanda's Trey Sites is the Newcomer of the Year for helping to lead the Black Knights to their third straight NTL Large School title in his first year at quarterback.

North Penn's Nick Harer is the Lineman of the Year. He anchored the offensive and defensive lines for a team that won the Eastern Conference title.

For First Team offense Cooney is the quarterback with Bennett and North Penn's Skye Stiner in the backfield. Tioga's Tyler Spires is the First Team fullback.

Fellow Trojan Lucas Havens is the versatility pick while Towanda's Zack Ripic is the utility selection.

The kicker is Athens' Troy Stivason.

For First Team defense the tackles are Duval and Canton's Wes Campbell while Towanda's Joe Daniello and Sayre's Ryan Myers are the ends.

The versatility pick for defense is Wyalusing's Dan Frankenfield while North Penn's Marquis Delgado is the utility selection.

Canton's Ben Pepper is the punter.

The Second Team offense is headlined by Sites at quarterback while the running backs are Athens' Casey Shiposh and Sayre's Jesse Dagutis. Wellsboro's Thomas Johnston is the fullback.

Canton's Jordan Campbell is the versatility pick while Towanda's Casey Huff is the utility.

The kicker is Troy's Josh MacClaren.

The Second Team defense is Troy's Delbert Lewis and Towanda's Garrett Dinelli at the defensive tackle spots with Tioga's Adam Strong and Wyalusing's Clayton Force on the ends.

The Third Team offense is North Penn's Jason DeHaven at quarterback, Tioga's Zach Williams at fullback and Waverly's Nick Puusalu and CV's Ryan Freeman at the running back spots.

Troy's Jed Wright is versatility while Athens' Tyler Birdsall is the utility selection.

The Third Team defense has Gabe Gates of Waverly and David Mendola of Sayre in the tackle position while the ends are Waverly's Chris Raupers and Canton's Tim Bassett.