High to fullback looks like right move for Canton. 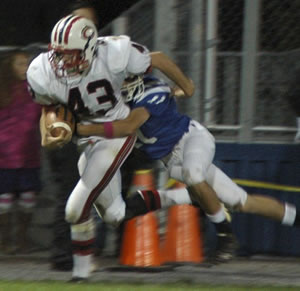 Canton senior Kyle High usually learns on Monday what position he will be playing that weekend. A series of costly injuries have forced Canton to move the three-year starting tackle from up front to tight end and then to fullback.

Running with fury every time he carried the ball, High stampeded his way to 152 yards and two touchdowns on 14 carries Friday at Rodney K. Morgans Stadium, highlighting a dominant Canton performance as the Warriors won, 48-14 and took a big step toward securing a fourth District 4 Class A playoff berth in five years.

"I love it. It's nice to run the ball," High said. "I used to run it back in junior high and I'm just getting back into it now. I just put my head down and hope I can see some green on the other side."

High often did, but before that he also saw a lot of blue. Time after time, though, the 6-foot-1, 195-pound bruiser either ran over defenders or carried tacklers for five or more yards. Three times, High broke five tackles while breaking long runs and his 19 yard third quarter touchdown run was highlight material as he barreled over two defenders who had clean shots at him.

"He's one of the better athletes on the team and with all the injuries we've had we've had to move people around and he's certainly stepped up," Canton coach Miller H. Moyer said. "He's done whatever we've asked him to do. He wouldn't care if he was still at tackle, he'd still be playing hard."

High, however, hardly was a one-man show. All the Warriors who played Friday reflected that work ethic as three others topped 80 yards rushing. Quarterback Ben Pepper ran for 80 yards and three touchdowns while Scott Rockwell added 89 yards and a score. Wes Moore not only ran for 87 yards, but ended two promising South drives with interceptions while sophomore Josiah Bardo returned a third-quarter interception 54 yards for a touchdown.

The Warriors (4-3) are young and have lost a series of starters but they keep finding ways to win and are poised to reach the postseason for a fifth straight year. The offensive line has constantly been reconfigured but was fantastic last night, clearing the way for 416 rushing yards as freshmen Tanner Machmer and Connor Route combined with players like Jakob Hite, Chad Gordner, Lucas Hite, Jakob Miller and Kaleb Route to control the line of scrimmage and help Canton build a 21-0 halftime lead.

The Warriors scored on four of five possessions between the first and third quarters, taking a 27-0 third quarter lead and then putting the game away when High and Bardo scored touchdowns a minute apart to make it 41-7 late in the third.

"They were doing a very good job tonight. They were getting a good push and held their blocks well and got me going," High said. "It's been a tough season with the injuries and hopefully we can finish out strong."

That is what South (1-6) is hoping to do too. The Mounties are one of the district's youngest teams but showed signs of promise. Had they been able to score on two straight first-half drives inside Canton's 25-yard line, the game's complexion might have changed. Moore, however, ended both drives with interceptions inside the five-yard line, getting good returns on both picks.

South pulled within 27-7 early in the third quarter when Tye Sheets ran through a big hole on the left and ran 59 yards for a touchdown. The Mounties then forced a three-and-out, but went three and out on their ensuing possession and Canton took control when High scored his second touchdown of the quarter.

"Every yard against Canton is a hard-fought yard but to not convert those (first-half drives) caught up with us," South coach Mike Pearson said. "I was happy our kids kept battling. That's important for these kids. We're going after it every day and you want to try and find something positive for these kids because it's important to them and it's important to their families that we keep a positive attitude and keep fighting every day. That's what it's all about."

Still, the night belonged to Canton which played its most complete game this season. The defense held South to 15 first-quarter yards and did not allow a first down until the second. At one point, the Warriors held South to two yards or fewer on seven straight plays. Kaleb Route made a team-high 10 tackles while Rockwell consistently put pressure on South's quarterbacks.